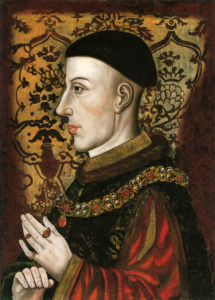 Anyone who has watched a stage or film version of Henry V (such as the 1944 Olivier version, infused with echoes of World War II, or the critically acclaimed 1990 Kenneth Branagh version) will remember Henry’s inspiring speech to his troops just before he leads them into the Battle of Agincourt. But when he gets to the part about it being St. Crispin’s Day, you may find yourself puzzled by the reference. Who was St. Crispin anyway, and why would Henry make a point of mentioning him at that moment?

The online Encyclopaedia Britannica tells us that Saints Crispin and Crispinian were brothers from a wealthy family who came to Soissons, France (not far from Agincourt) in the third century A.D. to set up shop as humble shoemakers and live a devout Christian life—hence their designation as the patron

saints of shoemakers, tanners, and saddlers. Unfortunately, this was a period of persecution of Christians throughout the Roman Empire, so the brothers were pressured to renounce their faith. Even when they were tied to millstones and thrown in the river, though, they managed to escape injury and remain true to the teachings of Christ. Eventually, Diocletian’s co-emperor Maximian had them decapitated.

Now for the English angle (no pun intended): First, there’s the legend that after the brothers’ martyrdom, their bodies washed up on the shore of Romney Marsh in the County of Kent, England. And in a variation on the English connection, another tradition has it that, fleeing persecution, Crispin and Crispinian came to Faversham in Kent and plied their trade at a house on the site of the present-day Swan Inn (where there is a plaque commemorating this fact). The local parish church even has an altar to the brothers; as recently as the 17th century, local and foreign pilgrims visited the site.

Now that you’re one of the “happy few” who know the story, why not celebrate the Day of Saints Crispin and Crispinian by: