This poem, by Elizabeth Akers Allen (1832-1911), is one of many works that have been inspired by Anne Boleyn who lost her head 477 years ago. She had won the heart of Henry the VIII, but refused to become his mistress; she demanded marriage. Thus in 1527 Henry proposed and there ensued a seven-year courtship during which time Henry worked to attain an annulment from his marriage to his first wife Queen Katherine of Aragon. During the years 1527 to 1528, Henry wrote numerous love letters in both English and French to Anne telling her how much he wished she could be by his side. Since the Pope would not grant the annulment, Henry divorced Catherine, and in 1533 they married, and Anne soon gave birth to Elizabeth — not the son that Henry had counted on. Following this birth and two subsequent miscarriages, his interest in Anne waned, and he looked elsewhere for a wife. So their brief marriage ended with Anne being charged with adultery and treason. Her peers found her guilty, and on May 19, 1536, the Executioner of Calais beheaded her with a sword.

The Sheridan Libraries have various materials that one can use to explore Anne’s short and tragic life. First there are books both non-fiction and fiction. The most recent biography available in the collections is The Life and Death of Anne Boleyn: ‘The Most Happy’ by Eric Ives. This is a scholarly work about Anne and life at the Tudor Court. If you want fiction, there is The Queen of Subtleties by Suzannah Dunn. In the Booker Prize novel Bringing up the Bodies, Hilary Mantel tells the story of Thomas Cromwell’s relationship with Anne, and how he carried out Henry VIII’s wish to be free of Anne so he could marry Jane Seymour. 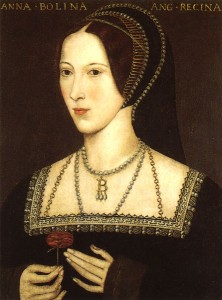 Anne appears in plays, in television, and in film. William Shakespeare wrote circumspectly about Anne in his play Henry VIII. The modern playwright, Howard Brenton had no constraints. He wrote the play Anne Boleyn for the Shakespeare Globe Theatre which premiered in 2010. In this play, Anne is portrayed as a significant force in the political and religious in-fighting at court and a supporter of the cause of Protestantism in her enthusiasm for the Tyndale Bible. If live theater is not an option, this summer could be a good time to catch up on the Showtime series The Tudors. It is a 15-DVD set that tells the story of Henry VIII’s life – watch it all or only Season Two which covers Anne Boleyn’s relationship with Henry. Or if you prefer a feature film, there is the movie The Other Boleyn Girl a story of Anne Boleyn and her sister Mary.

Grand opera suits the rise and fall of Anne Boleyn. Domenico Donizetti composed the two-act opera Anna Bolena which was immensely popular when first performed and propelled Donizetti’s career. Recordings and a video of the opera are available in the library.

Thus Anne Boleyn’s short life and tragic end has inspired writers and musicians and continues to do so.