John Barth Loves Us: A Valentine to Fiction 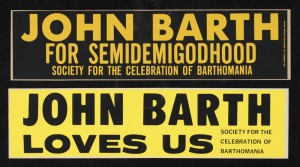 S: …with me and John Barth?

S: It’s a party, but it’s also a reading. JB won’t be there in the flesh, but he’ll be there in spirit, because the party is at his house… his exhibition, actually. An exhibition at the Peabody Library of his manuscripts, books, letters, including those insane bumper stickers at the top of this blog post. Which he did not make, by the way. His fans made them. He had a fan club.

Z: So what about the other people on the date? Rafael, Madison, Matt, Rosalia, and Jason?

S: They will be there, and they’ll be reading from their work. They might do stylistic homages to Barth, otherwise known as imitations. Or, they might read about fiction. Or about love. Or about loving fiction. Which I think is in the job description for fiction writers.

S: And also a roundtable. After we eat some cookies and cake, and listen to readings by Rafael, Madison, Matt, Rosalia, and Jason… then they’ll talk about fiction… like, what are you reading, and why? What is fiction in 2016, anyway?

Z: What does that have to do with John Barth?

Z: That’s the story about the boy who gets lost in the funhouse, right?

S: Lost in the Funhouse is sub-titled Fiction for Print, Tape, Live Voice.

S: Meaning, it was a printed book that was pretending it wasn’t. Or, at least, it was reminding us that fiction is fiction, regardless of medium.

S: And that is where we are now, dude. Again. Or more so. Are you reading fiction on your smartphone? Or listening to the audio version of a short story collection? Grooving on a tv show serialized like a nineteenth-century novel?

S: And, more than that, genre is now very mixy, something that we can also trace back to John Barth, in novels like The Sot-Weed Factor and The Tidewater Tales that draw on historical documents and folk tales. So, if you are into a certain film based on a short story… or a short story based on a newspaper article…

S: …then you can also thank JB for that, at least in part. This is where we are now. But JB was mixing things up back in 1968.

Z: What about Rafael, Madison, Matt, Rosalia, and Jason? Mixy?

S: Definitely also mixy. Fiction mixed with film and television, journalism and history. And even some theatre and music.

Z: One question. What if I’m not all that into Valentine’s Day?

S: No problem. There will not be stupid Cupids all over the place, I promise. It’s a Valentine to fiction. But… um… it would be awesome if you were there too. Sunday, February 14, 2 to 4 pm, at the George Peabody Library. RSVP to libraryfriends@jhu.edu.