Lost and Found in the Funhouse: Open for Business 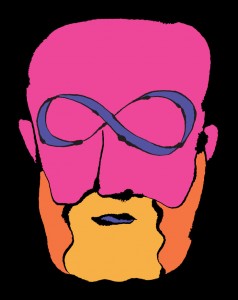 Our new exhibition of rare books and manuscript materials is open… now! Lost and Found in the Funhouse: The John Barth Collection celebrates the American writer John Barth, known for his masterful literary experiments. Barth’s novels and stories are full of surprises: not just because of their unpredictable story-lines, or the strange creatures inhabiting them—although there are plenty of those; but because of his inventive story-telling techniques.

Take “Lost in the Funhouse,” from Barth’s 1968 collection of the same name. A thirteen-year-old boy named Ambrose Mensch visits Ocean City, Maryland with his family and a girl he likes. Simple enough: a coming-of-age tale. But while Ambrose explores the boardwalk, the pool, and the funhouse, he also comments on his own story as he tells it, like a writer agonizing over his work of art. It’s a perfect example of metafiction: fiction that is, on some level, about fiction. Like a magician raising the backstage curtain, Barth lets us see how the story’s illusions are built—reminding us that a made-up plot populated with made-up characters is, after all, made up. As we follow the twists and turns of the story’s two intertwined accounts, we lose touch with what is “really” happening… but we gain an exhilarating and profound experience. Reading “Lost in the Funhouse” feels like a voyage through an astonishing funhouse, designed by a virtuoso engineer.

With this story as its touchstone, Lost and Found in the Funhouse presents you with highlights from the John Barth Collection: Barth’s manuscripts and books; the library he assembled with his wife Shelly; artifacts from his youth in Cambridge, Maryland and his teaching career. 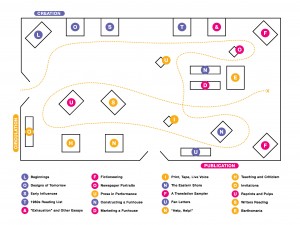 This rich archive suggests that the story of John Barth’s writing cannot be told in a straight line leading from composition to publication. It is influenced by sources close to home—the Chesapeake Bay area—and far away. Barth’s influence, in turn, is both local and global. Wherever it travels, his work prompts commentaries, translations, new projects. In other words, publication is not just an end-point but also a beginning. Accordingly, the materials on display are divided into three groups that correspond to different stages of the writing cycle: creation, publication, and circulation. But, since this cycle does not always flow in a single, orderly direction, the materials associated with each stage are distributed throughout the gallery, funhouse-style. You can follow the pathway shown on the map above… or not. Each case is marked with its motif to help you determine where you are and how you want to proceed.

You can get a sense of what awaits you here. The exhibition is at the George Peabody Library at 17 East Mt. Vernon Place, now through February 28, 2016!