The world of American poetry, and the world of letters at large, lost a strong and unique 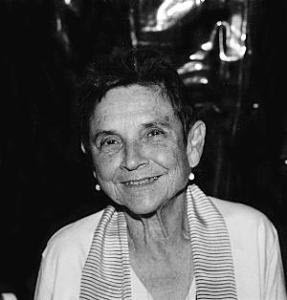 voice on Tuesday. Adrienne Rich, a poet of enormous talent and renown, died at her home in California at the age of 82.

Rich was a Baltimore native. She was born here in 1929, and was exposed to poetry at a very early age by her father, Arnold Rice Rich, who taught at Johns Hopkins School of Medicine.

Her early poetry displayed her firm grasp of rhyme and meter, lessons she learned among the books in her father’s library. But she developed her own voice, and her later poems have a cadence all her own. The cadence is not the only thing all her own; Rich explored the lives of women, and of lesbians, with unflinching clarity. She strove to describe the stultifying life of many women, as she sought to overcome the many forms of injustice she saw around her.

Often controversial and polemical, she was a poet not to be ignored. Rejecting a National Medal of Arts in 1997, she said: “Art means nothing if it simply decorates the dinner table of power which holds it hostage.”

Read her own brand of power in “Aunt Jennifer’s Tigers”

Aunt Jennifer’s tigers prance across a screen,
Bright topaz denizens of a world of green.
They do not fear the men beneath the tree;
They pace in sleek chivalric certainty.
Aunt Jennifer’s fingers fluttering through her wool
Find even the ivory needle hard to pull.
The massive weight of Uncle’s wedding band
Sits heavily upon Aunt Jennifer’s hand.
When Aunt is dead, her terrified hands will lie
Still ringed with ordeals she was mastered by.
The tigers in the panel that she made
Will go on prancing, proud and unafraid.

Read the full New York Times obituary, and the American Academy of Poets article on her. you can also explore her books in our collections, and read books about her.

One thought on “Adrienne Rich: a poet lost, and found”