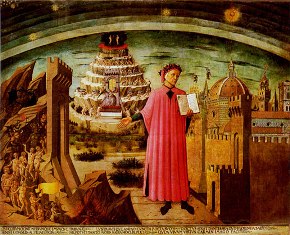 Canon wars aside, on anyone’s list of the most important works of all times you will surely find Dante’s Divine Comedy. Written 800 years ago, this poem in 3 parts follows Dante the pilgrim through Hell, Purgatory and Heaven. The journey is arduous but incredibly rewarding, and I’m not just talking about Dante’s experience. The reader’s journey is equally exhilarating and intense.

The interesting thing about the poem is how well it has translated to the Internet. Almost from the beginning, way back in the 1980’s, there have been online projects based on the Divine Comedy. The granddaddy of them all is the Dartmouth Dante Project (DDP), an online searchable database of the Comedy and all of its commentaries. Almost as venerable is the ORB (Online Reference Book for Medieval studies), with an entire section devoted to Dante. Then followed Deborah Parker’s project at UVA: The World of Dante. The DDP spawned the PDP, the Princeton Dante Project, and from Columbia University, Digital Dante.

All of these online projects, and these are just a few, exploit the inherent complexity and richness of Dante’s work. They include commentaries, illustrations, readings, translations, glossaries of people, ideas and events, and of course the text itself.

At the other end of the spectrum is the print publication history of Dante’s masterpiece, beginning with manuscripts of the text (the only way it was read for over 100 years). After Gutenberg’s invention, the Comedy was one of the first secular texts to be printed, beginning in 1472. The Sheridan Libraries own 2 early editions, both at the Garrett Library. Publication exploded in the 16th century, as many more editions were printed. We own 8 very interesting ones, and you can see the changes in the layout of the text develop, as text, illustrations and commentaries are woven together on the printed page. And of course, publication continued and expanded, right down to the present. New editions and translations appear almost every year. So you can have your cake and eat it too! Explore online, pore over dusty old volumes, or read modern editions. Dante is still the poet of all ages.