“My dear darling little girl” – a life revealed through letters

Captain John Gurnel Alexander wrote dozens of letters to his sweetheart, Alma Hood, while stationed in Europe during World War I. In one of the letters he asked her to keep the correspondence safe. They would become a testimony of his trip and of their young love. But the John Alexander Correspondence collection, which I am currently processing in Special Collections, has become so much more: it is a historical record of World War I and of life in early 20th century.

Alexander was born in 1888 in Franklin County, Georgia, and worked as a clerk for the Southern Railroad System. When the United States entered the war, in 1917, he joined the Officers’ training camp in Fort Oglethorpe. In his application, Alexander wrote that he wanted a “better position” in his professional life, possibly due to his recent wedding to Alma and their newborn son. One year later, at age 30, he was sent to France and Germany to serve as a Lieutenant and Intelligence Officer at the war.

When her beloved husband traveled overseas, Alma Hood moved to Lutherville, Maryland, to be closer to her family. In one of her first letters to Alexander she reported that milk had started to flow and that she was nursing their “little angel” with lots of love. Around the same time, a close friend wrote to Alma hoping she would find comfort in the young child while Alexander was across the Atlantic Ocean “in this awful turmoil of fighting.” 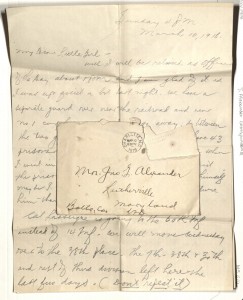 But their separation was difficult. Alma was constantly worried about Alexander’s well- being as he tried to reassure her that the war was almost over. In spite of the censorship applied by the army, he described how Germans came to the camp to surrender. It was a sign, he thought, that enemy was tired of the war. In many letters Alexander longed for their meeting: “Don’t worry little girl. A perfect day is coming and I will be home before you realize it.”

On top of the hardship of maintaining a long-distance relationship, the couple struggled to communicate because the mail service was uncertain. Soldiers would mail letters from Europe any way they could, and on one occasion Alexander even asked a surgeon to take an envelope in an ambulance. But when they finally arrived, the letters kept their love alive: “It is a long time between mail, but dear sweet girl, we know that we love each other dearly and must become accustomed to a wait, even though it is very hard.”

With every handwritten word their relationship even seemed to mature. On May 17, 1918, Alexander wrote: “You said on your letter number #1 that you were ‘proud of me’- did you really mean that or were you kidding me. I believe it was the first time I ever heard you say that.” And when they were finally reunited, after six months, their love was still strong. Alexander moved to Lutherville and enrolled as a law student at the University of Maryland. 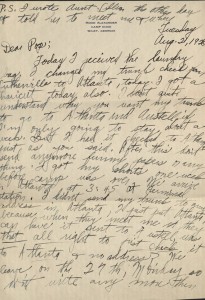 The couple had a full life ahead of them, but a letter dated February 1927 reveals their happiness was short lived. Childhood friends from Georgia wrote to Alexander mourning Alma’s death. She had been sick for over a year and had recently succumbed to the illness at Johns Hopkins Hospital. They were concerned about Alexander because they knew she was his sweetheart and his life. And they were also worried about their son, Hood, who was only 10 years old.

But the last chapter of this story is hopeful. The next batch of letters in the collection was written by their son, Hood, as a teenager, from 1928 to 1932. He scribbled words to his “Pop” Alexander, every time he went away to Summer Camp Dixie in Colorado. Hood became an enthusiastic young man who enjoyed camping and swimming. And Alexander kept all his letters, as a testimony of love and life in spite of adversity. He could not imagine that the complete collection would also become a written account of 20th century history in peacetime and war.