Happy 80th Birthday to the Friends of the Libraries 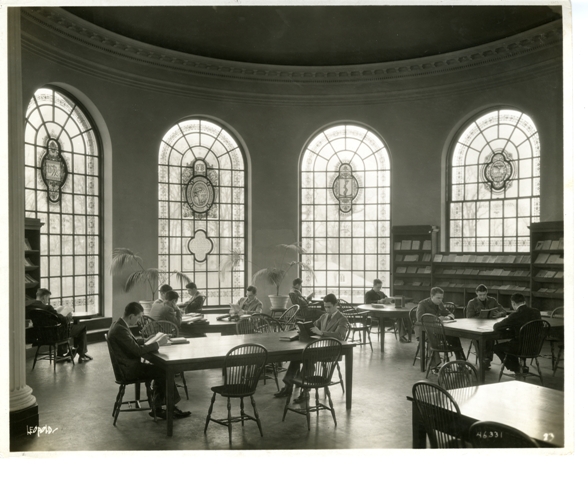 On March 5, 1931, in Gilman Hall, the Friends of the Johns Hopkins University Libraries was established. This group, founded at the request of President Joseph Ames and following the example set at Oxford’s Bodleian Library by Sir William Osler, was created to provide financial support for the university library, particularly for acquisitions.

If it seems odd that the Friends’ birth should come more than 50 years after the university’s founding, consider that the original library used by the university was the George Peabody Library. Its significant collections (some 60,000 volumes in its early years) and proximity to the university — then located downtown — made it a perfect resource for the new university. Indeed, the first appropriation for books was only $5,000 as there was no need to purchase materials that would duplicate the Peabody’s substantial holdings.

When the university moved to its current location at Homewood, 40 years later, it became clear that having a library some two miles distant from campus was not the best arrangement for faculty and students. The university’s library had grown, through department holdings, to nearly 200,000 volumes, but the collection was hardly comprehensive (Ames called it “spotty”) and in need of support.

Enter the Friends of the Libraries, whose first executive committee contained names that will be familiar to Hopkins alumni and students today, including Frank J. Goodnow, Hopkins’ third president; Albert D. Hutzler, for whom the reading room is named; and William H. Welch, one of the “Big Four” of Hopkins Medicine and namesake of the medical library. (The Friends’ current president Catherine Passano McDonnell, is the great-granddaughter of Edward B. Passano, another of the original founding members.)

Founding president Henry Barton Jacobs, writing on the front page of  the first issue of ex Libris, stated the group’s aims: “an association of persons who take a friendly interest in the general Library of The Johns Hopkins University” that would be committed to discussing books, using the library, and providing annual dues to “make possible the purchase of such books as could not have been bought out of the Library’s current funds.”

Since that time, the Friends of the Libraries has grown from a small gathering of local book enthusiasts and collectors to a national group comprising alumni, parents (and grandparents) of alumni, faculty, staff, and others who are committed to keeping the Libraries at Hopkins vibrant. With nearly 700 members across the country, the Friends provide support for acquisitions (both print and electronic), for programming (like recent talks by authors Sam Kean and Cort McMeel, as well as the popular undergraduate reading series on the steps of the Eisenhower Library), and for technology upgrades to help Hopkins scholars stay ahead in a research landscape that is constantly changing.

Happy birthday Friends of the Libraries, and here’s to the next 80!