The world of 20th-century Irish literature can feel dominated by certain giants looming over the rest; Joyce, Beckett, Yeats, and Heaney have, and deserve, their impressive positions. Nonetheless, certain names ought not be forgotten, such as Brian O’Nolan, Myles na gCopaleen, Brother Barnabus, and Flann O’Brien. Happy 101st to all four of them! 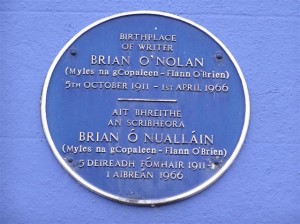 The man born Brian O’Nolan, whom Joyce hailed “a real writer with the true comic spirit,” assumed various pseudonyms throughout his life. His novels, though not appreciated fully during his life, have since his death been rediscovered. John Updike wrote that “the man was ingenious and learned like Jim Joyce and like Sam Beckett gave the reader a sweet dose of hopelessness.“ O’Nolan also cooperatively founded the tradition of Bloomsday, when, in 1954, he and several cohorts (including Joyce’s cousin) hired horse-drawn cabs to meander the streets of Dublin.

As Flann O’Brien, O’Nolan authored several novels including the whimsical At Swim Two Birds, a dizzyingly-layered novel in which the characters conspire against their authors, and which inspired a very bizarre 1997 Austrian film; and the mesmerizing The Third Policeman, a work of murder, theft, bicycles, French philosophers, and nearly insoluble pancakes. The Third Policeman, never published during O’Nolan’s lifetime, contains a long series of varied and absurd footnotes regarding the ideas and conundrums of the fictional philosopher De Selby: 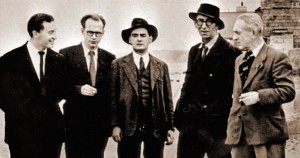 “De Selby was obsessed with mirrors and had recourse to them so frequently that he claimed to have two left hands and to be living in a world arbitrarily bounded by a wooden frame. As time went on he refused to countenance a direct view of anything and had a small mirror permanently at a certain angle in front of his eyes by a wired mechanism of his own manufacture.” (footnote on p. 276)

“It is noteworthy that the savant spent several months trying to discover a satisfactory method of ‘diluting’ water, holding that it was ‘too strong’ for many of the novel uses to which he desired to put it.” (footnote on p. 353)

Though O’Nolan sadly passed away in 1966, his memory lives on in the Dalkey Archive Press, founded in the name of another O’Brien novel, The Dalkey Archive, in which James Joyce himself appears as a draft-dodging bartender.

Let’s raise a glass to the many men that Brian O’Nolan was, for, as O’Nolan himself had said, a pint of plain is your only man!