Where the Visual Meets the Verbal: Letters as Art 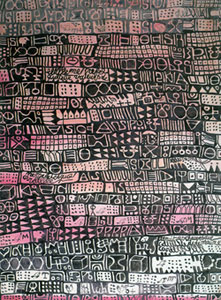 The Sheridan Libraries’ significant avant-garde collections hold some real gems; among them is one of the most important collections in North America of the mid-20th century French movement of Lettrisme. We have been adding to our lettriste holdings over the past several years and now have an important collection, including the movement’s periodicals and books. Interestingly, the basis of our Lettrism holding is in the Goulemot collection. Many of our early lettrist titles come from this collection.

The essence of lettrisme is, well, the letter. Its founder, Isidore Isou, believed that poetry must be deconstructed, down to its most basic element, a single letter. Letters, as mere visual symbols, would be the basis of a new poetics and art. Isou’s ideas and influence spilled over into the visual arts, film, architecture, even mathematics, psychiatry and politics.

There’s nothing new under the sun of course, and Lettrism probably reminds you of Concrete Poetry, which has been around for centuries. Coincidentally, the Sheridan Libraries also boasts a significant collection of this unlikely marriage of word and image; from a book of the German Baroque to Guillaume Apollinaire’s experiments in the early 20th century, and lots in between.

The Lettrist collections here at the Sheridan Libraries include books by Isou and his colleague Maurice Lemaître, periodicals put out by the lettrists, as well as works by their once-collaborators and later rivals – the Situationist International, led by Guy Debord.

Try exploring our collection of this fascinating movement. Here are a few searches to get you started:

Look for an exhibit in the Eisenhower Library at the end of this month showcasing our Lettrist holdings. The exhibit will be curated by the students in Professor Molly Warnock’s class on “the long 60’s” in European art.