Edgar Allan Poe, check. But what other writers are known for a Baltimore connection? Someone lesser known outside of Baltimore, but revered by locals is the acerbic H. L. Mencken. 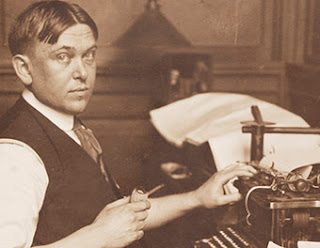 Known as “the Sage of Baltimore,” Mencken never left his hometown, in spite of national success. Even though he kept an office in Manhattan, he returned every Friday to his home, a humble rowhouse that still stands at 1524 Hollins Street.

Author of an important study of the English language (The American language) and founder and editor of an influential review (American Mercury), Mencken was also a journalist for the Baltimore Sun and one of the 20th century’s leading literary and social critics. Sometimes called the “American Nietzsche,” he was colorful, controversial, and absolutely candid. Mencken always wrote what he believed, no matter whose feathers he might ruffle. And he often ruffled feathers. But his prolific writings, as newspaperman, book reviewer, and political commentator, attest to a fiercely independent and passionate spirit. Baltimore clings fast to this native son; he was not afraid to speak his mind. Much of what he wrote reads like Ambrose Bierce’s Devil’s Dictionary.

The Special Collections department of the Sheridan Libraries can boast of not one but two superb collections of “Menckeniana.” The Robert A. Wilson Collection of H.L. Mencken includes Mencken publications, original letters and photographs inscribed by Mencken. A gift from alumnus and trustee Richard S. Frary (class of 1969) and his wife Irene, the collection is named in honor of fellow Mencken collector and Hopkins alumnus Robert Wilson (class of 1943).

The George H. Thompson Collection was believed to be the largest privately held collection of items associated with writer and journalist, before it was acquired as a gift-purchase from Thompson’s wife and son in 2007. It includes nearly 6,000 books, articles, letters, photographs and other items amassed over 44 years by an Ohio accountant with a passion for the Sage of Baltimore.

And of course locally, the Enoch Pratt Free Library houses the H.L. Mencken Room, where you can experience his working study, complete with his personal library and typewriter. An annual Mencken Day event takes place there every September, on the Saturday closest to his birthday, September 12.

As colorful, quirky and full of contradictions as the city he loved, H. L. Mencken is worth a look.