Once upon a time, Baltimore was known as “the city that reads.” Then Mayor Kurt Schmoke coined this moniker in 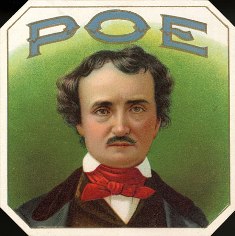 1987, and while many have derided it, Baltimore does indeed have much to offer in the way of literary activity. This is the first in an ongoing series.

Baltimore has long been associated with  Edgar Allan Poe, even though he was born in Boston and lived much of his life in Virginia and New York. It was in Baltimore however that Poe first rose to  prominence, winning a literary contest in 1835 for his story “A Manuscript Found in a Bottle.” And of course, it was in  Baltimore that he mysteriously died. Poe’s grave, at the Westminster Hall and Burying Ground in downtown Baltimore, is still a pilgrimage site for his fans.

For much of his time in Baltimore, Poe lived in a tiny house on North Amity Street, and this house has been carefully preserved as the Poe House and Museum. In the uppermost room of the house, Poe wrote many of the stories and poems for which he is now famous.

The Sheridan Libraries abound with Poe-related material, much of it a result of the assiduous collecting activity of our Librarian for American Literature, Gabrielle Dean. These include:

The Enoch Pratt Free Library also has a significant Poe collection; including letters, clippings, books, and a lock of both Poe’s hair and that of his child bride, Virginia.

Stay tuned for the next installment of Literary Baltimore: “A Look at the ‘Sage of Baltimore,'” and perhaps the quintessential intellectual Baltimoron (if that’s not too much of an oxymoron), H.L. Mencken.