The Game is Afoot! 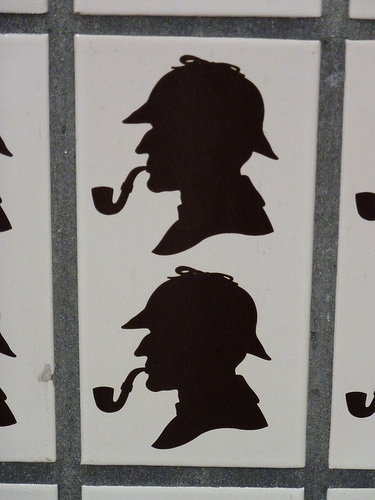 Unless you’ve been living under a rock that’s beneath a few more rocks, you’ve doubtless come across the revamped BBC/PBS production of Sherlock. Countless fans have had to wait countless months between seasons that count a mere three episodes each. The popularity of Sherlock the TV series and the numerous adaptations, homages, and spoofs speak to the genius behind the daring duo of Holmes and Watson, Sir Arthur Conan Doyle. Thankfully, for anyone who has caught Sherlock fever, Hopkins is your Dr. Watson!

The library is your one-stop shop for all things Sherlock. Here you can find the texts themselves, scans of the first appearances of novels and stories, Arthur Conan Doyle’s collected letters, and even access to serious Sherlock scholarship! If you care to, check out this recorded interview with Doyle, wherein he discusses Sherlock and spiritualism, or read (in Vol. 3, No. 2) a Believer interview from 2005 with the deceased Doyle (fascinating).

Thanks to a recent court decision, we may end up seeing even more Sherlock spin offs and fan fiction. Either way, fans of Sherlock the television series need not fear. Though this season has passed, there is more to come!

One thought on “The Game is Afoot!”