Charles Dickens and Me

Welcome to another entry in our series of occasional posts in which Special Collections student employees discuss the cool items they get to work with! Jessica Terekhov, the author of this piece, is a freshman who plans to study English literature. A devoted fan of Charles Dickens, Jessica was quite pleased to discover our collection of first and limited editions of the master’s work. 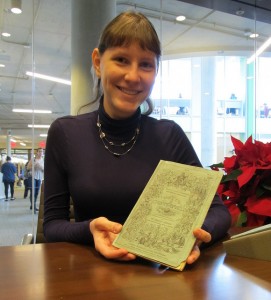 I had fallen in love. It was my freshman year of high school: I met Oliver, Nancy, Bill…and him. It wasn’t long after his first enthralling words that I realized I had never felt anything similar, and wouldn’t, probably, ever again. Five years later, I breathlessly pore over a serial of David Copperfield at Hopkins’ Special Collections. Yes: an 1849 original installment.

Arguably the most recognized of Victorian writers, Charles Dickens wrote over a span of three decades, until the 1860s. His literary renown began with the publication of The Pickwick Papers, a project he transformed from a series of captions into a full-length narrative from 1836 to 1837. Dickens was himself transformed from a fledgling journalist into a sensation among English and American readers. His novels were serialized (in monthly parts) before appearing in book form, and his last completed work, Our Mutual Friend, appeared in 1865. He died at the age of 58 in 1870, and would have celebrated his 200th birthday on February 7, 2012.

Charles Dickens’ body of work is as appreciated now as ever. Its social insight is continuously explored, its characters constantly reevaluated as vivid forces in their own evolving society. Dickens recorded societal change during a revolution of unprecedented magnitude: the transition to the mechanical age. His novels portray exploitation, injustice, and the ills of industrialization, themes all remarkably resonant today.

To his contemporary readers, Dickens nevertheless remains a master story-teller. His writing has a heart that sustains it against the threat of passing time. His characters, as terrifying as they may prove, are emphatically human…and, occasionally, nutty. Humor invades Dickens’ narratives with irresistible ironies and witticisms. Hardly anywhere else can a character wear “a sawdusty fragrance,” or is “the office of respiration” a “practice, … which custom has rendered necessary to our easy existence.”

I was fortunate enough to work with Dickens volumes from previous centuries, even several first editions! Special Collections holds a limited edition of Great Expectations, printed in 1937 with alternate illustrations and the first appearance, in book form, of Dickens’ original ending. How could Hopkins not own, in addition, an 1837 joke book inspired by “all the funny sayings” in the The Pickwick Papers?