What I Found In Special Collections: Chaucer’s The Canterbury Tales 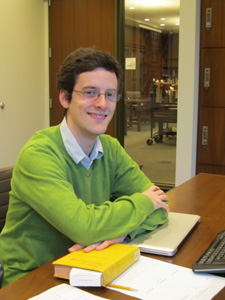 Welcome to the first in a series of occasional posts in which Special Collections student employees discuss the cool items they get to work with! Gabriel Denis, the author of this piece, is a sophomore History major. He spent the summer working at the George Peabody Library where he became enchanted with the Kelmscott Chaucer!

How many of you ever had to read passages from Chaucer’s The Canterbury Tales back in grade school? Maybe you had to memorize an excerpt from one of the tales, or maybe you had to analyze the significance of the various characters. Whether or not you’re personally familiar with the literary work, it goes without saying that The Canterbury Tales is a pillar of English literature, and it comes as no surprise that many readers throughout the ages have had a love affair with this book!

One particularly important aficionado of The Tales was William Morris (1834-1896), who managed to be both a proper English gentleman and an avowed socialist all at once. Morris, from an early age, trained himself in the art of fine bookmaking, learning calligraphy and wood-engraving and fashioned acclaimed manuscripts from the 1850s to the 1870s. By the 1880s, Morris decided he was going to do what all the cool kids were doing, namely collecting books. While collecting and admiring classic books and manuscripts, Morris decided he would go out with a bang and founded the Kelmscott Press in 1891 for the express purpose of creating magnificent editions of existing works of literature.

Of prominent importance to him were Chaucer’s works, whose author he and his close associate, Edward Burne-Jones (1833 to 1898), considered to be the father of all English literature. Indeed, Morris had expressed a desire to create a contemporary edition of The Tales as early as 1854, and he and Burne-Jones devoted the majority of the 1890s working on what would be their magnum opus.

The book, upon its presentation to the world in June 1896 (only four months before Morris’s own death), did not fail to disappoint. Burne-Jones, who had illustrated a number of books before the Kelmscott Chaucer, devoted a great deal of time and effort into drafting artwork that represented Chaucer’s various stories and characters. Indeed, out of 106 known illustrations that Burne-Jones created during his lifetime, 87 were interspersed amongst the pages of the Kelmscott Chaucer.

The book was critically acclaimed for its aesthetic quality and was highly sought after by book collectors across the world. The United States bought the lion’s share of the book’s 450+ run, with England, Germany, and even Japan collecting sizable shares as well. Today, there are 296 copies that are registered to individual institutions, with a further 249 copies that are suspected to exist in undetermined locations.

Hopkins, as it turns out, has two copies, one at the John Work Garrett Library and the other at the George Peabody Library. The Peabody Library acquired its copy from the noted book dealer Gabriel Wells, a naturalized Hungarian immigrant who collected a number of notable books and manuscripts, on October 7, 1943. Definitely come and check it out or view a selection of illustrations online, if not to see Burne-Jones’s magnificent illustrations that earned him the title of the “Victorian Artist-Dreamer” then at the very least to know you’re seeing a heckuva valuable book! Just remember that the next time you’re writing a short essay on the significance of “The Miller’s Tale“!