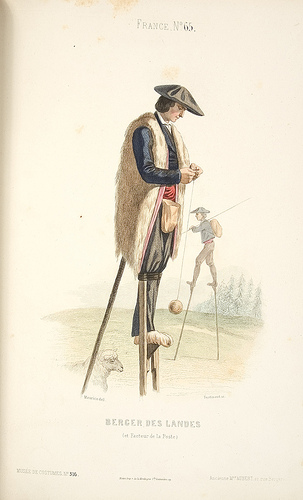 Ever wonder what goes on in the Department of Special Collections? Totally awesome things, that’s what! Our student employees in particular do a wide variety of jobs, from monitoring our snazzy Reading Room to conducting research on interesting items in our collections. Julie DePasquale, Writing Seminars Class of 2011, researched and selected images from two fascinating early 19th century European costume books. She discovered that fashion plates are more than pretty pictures:

Recently I’ve been digitizing engravings of costumes from two books located in the Garrett Library: “Museum of Costumes” by the Musee Cosmopilite and the publisher Aubert and “Costumes of Various Countries” by Georges Jacques Gatine and Louis-Marie Lanté.

The images in the first set were made between 1853 and 1863, according to an article by Frédéric Maguet in the journal Ethnologie Française. He writes that they were part of a larger trend in the early 1800’s: that of increasing interest in regional peculiarities and the development of distinct regional identities. Each costume, Maguet says, serves as a symbol for the region it comes from—a symbol even stronger than landmarks, dialects, and other markers of place.

Looking through dozens of these engravings has been an enlightening experience. I was surprised by how widely the costumes varied from region to region and country to country. Details that I’d always assumed changed with time—for the ladies, the length and width of skirts, and for the guys, length and cut of pants, as well as the styles, sizes, and practicality of shoes, hats, and the like—were also significantly affected by region.

The illustrations also present a different picture of women’s lives than I expected to find. All of the women are shown out and about on their own. In Lanté’s portraits, many of the women are identified by occupation: there are, among others, a cook, a head laundress, a knitter, a dairywoman, and many saleswomen offering a variety of products, including fruit, flowers, candy, sewing materials, and clothing. Whether or not the drawings reflect real women of the time with exact accuracy, the way the artist chose to portray them is significant in itself.

You can take a look at these two costume sets here!