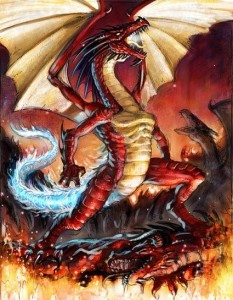 Are you thrilled that Game of Thrones has returned? Are you a fan of fantasy board games and sci fi movies? Then prepare to immerse yourself in JohnCon 2013 during the weekend of April 5-7.

JohnCon is the annual convention of JHU’s very own Science Fiction and Fantasy Association (HopSFA). The con is held in Levering Hall, continuously (yes, non-stop) from 5PM on Friday evening until 5PM on Sunday. There are movies, board games, anime, laser tag, panels, Dungeons and Dragons, and best of all, many like-minded people who understand the respective souls of sci fi and fantasy.

What’s that? You think you can invent a board game that will capture the world’s imagination (and also make you rich)? Perhaps you can – pick up some pointers in Game Inventor’s Guidebook. It’s an e-book, so you can read it right now.

Ah, you’re more of a video game creator? Try these e-books about how to market them. Are dragons your thing? Check out the intriguing subject heading “dragons in art,” which includes such titles as Dracopedia: a Guide to Drawing the Dragons of the World.

And we have anime — take a look at these books and films; amaze your friends with the fascinating facts you’ll learn from The Anime Encyclopedia. Manga? Covered.

So enter the fantastical world of HopSFA this weekend!