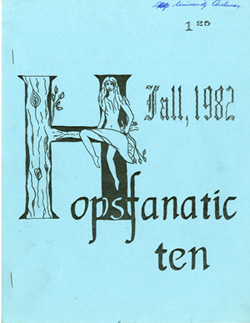 Its current name is The Johns Hopkins Science Fiction and Fantasy Association (HopSFA), but a club has existed since the early 1970s. The University Archives record for those early days of the club describes its activities, including game-playing and having a convention (originally called HopCon, and now called JohnCon).

The club also had at least one famous member: Roger Zelazny, whose Amber series were among his best-known works. No, he wasn’t a student; non-JHU people could join at that time. However, he was a member of the Baltimore Science Fiction Society, the group who hosts Balticon every year. (This year’s special guest is Dr. Ben Bova!)

To get back to JHU’s sci fi club: in November 1974, HopSFAnatic began publication. The first issue’s editors proudly announced that “…an issue of HopSFanatic finally exists…. We are an ambitious group… [and] have our first scifi convention in the works. …A letter column will be added as soon as we have some to print (hint: send us some).”

HopSFAnatic – one of whose cover images is shown – included original stories written by club members, book reviews, and announcements, among other things.

Have you always wanted to try your hand at writing science fiction but could never get started? Here’s some inspiration: conversations about writing with some of the best-known sci fi authors.  Or, are you interested in reading sci-fi books or books about sci-fi?  Here are some materials at MSEL that may interest you!