Only for Leisure, Breaks, and Procrastination…No More! Studying and Researching Comics

We’ve suggested reading comics and graphic novels a couple of times now, but we’ve yet to really talk about the study of graphic novels and comics. After attending this year’s Baltimore Comic Con, I realized just how much the world of comics is growing and evolving! To learn more about this burgeoning art form, one can attend a “comic con,” visit the Museum of Comic and Cartoon Art in New York, or, for the truly dedicated, one can attend the Center for Cartoon Studies in Vermont. And don’t forget, if you are looking for images of comics, historical or otherwise, to check out the ARTstor Digital Library.

More and more instructors are using graphic novels in their courses and, while it remains a somewhat small nook of academia, scholarly discourse is certainly available for your reading pleasure. If you’re interested in books about comics, there are a few different thematic pathways for you to wander. 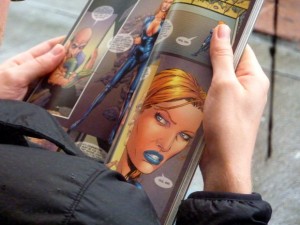 There are books which attempt to explain comics, discussing the general concepts and techniques. Perhaps the most well-known and groundbreaking are Will Eisner’s Comics & Sequential Art and Scott McCloud’s Understanding Comics: The Invisible Art. Produced entirely in comics form, McCloud’s book, as well as its two “sequels” (Reinventing Comics: How Imagination and Technology Are Revolutionizing an Art Form and Making Comics: Storytelling Secrets of Comics, Manga and Graphic Novels), is quite entertaining and fascinating to read—an explanation of comics drawn in that very art form. However, there are also many other more traditional academic books. David Carrier’s the Aesthetics of Comics deals with the pictorial format of comics, the interpretation of comics, and the relationship between comics and the history of art. Randy Duncan and Matthew J. Smith’s the Power of Comics: History, Form, and Culture is just that, giving valuable information about the historical evolution of comics, the comics industry, and comics audiences. For even more information on the evolution and history of comics, check out Forging a New Medium: The Comic Strip in the Nineteenth Century, edited by Charles Dierick and Pascal Lefèvre; Comics, Manga, and Graphic Novels: A History of Graphic Narratives by Robert S. Petersen; and Faster than a Speeding Bullet: The Rise of the Graphic Novel by Stephen Weiner.

Other books focus on the philosophy and culture of comics. The essays of Crossing Boundaries in Graphic Narrative: Essays on Forms, Series and Genres (Jake Jakaitis and James F. Wurtz, eds.) apply literary theory to the world of comics. Comics & Culture: Analytical and Theoretical Approaches to Comics (Anne Magnussen and Hans-Christian Christiansen, eds.) includes essays which discuss the battle for the validity of comics in our cultural landscape, new histories and types of comics, the integration of different media with comics, propaganda, and semiotics. Hillary Chute’s Graphic Women: Life Narrative and Contemporary Comics discusses prominent female comics writers and the issues–gender included–which arise in their works. For more theory, try Comics & Ideology, edited by Matthew P. McAllister, Edwards H. Sewell, Jr., and Ian Gordon; Graphic Subjects: Critical Essays on Autobiography and Graphic Novels, edited by Michael A. Chaney; and Comics as Philosophy, edited by Jeff McLaughlin.

Next time you’re looking for an innovative research topic (or a topic for a course, see Teaching the Graphic Novel, edited by Stephen E. Tabachnick), check out one of these books from MSE or use Interlibrary Services for the ones we don’t have. I know I’d certainly like to read essays like Jeremy Barris’ “Plato, Spider-Man and the Meaning of Life!” Hope we’ll see you on D-level!