The Levy Collection contains hundreds of songs that celebrate modes of transportation, ranging from boats, buses, and airplanes to hot air balloons. Not surprisingly, there are over 100 songs dedicated to bicycles—the collection has an entire box dedicated to them! This week’s deep dive will explore our bicycle songs with historic photographs on the covers. 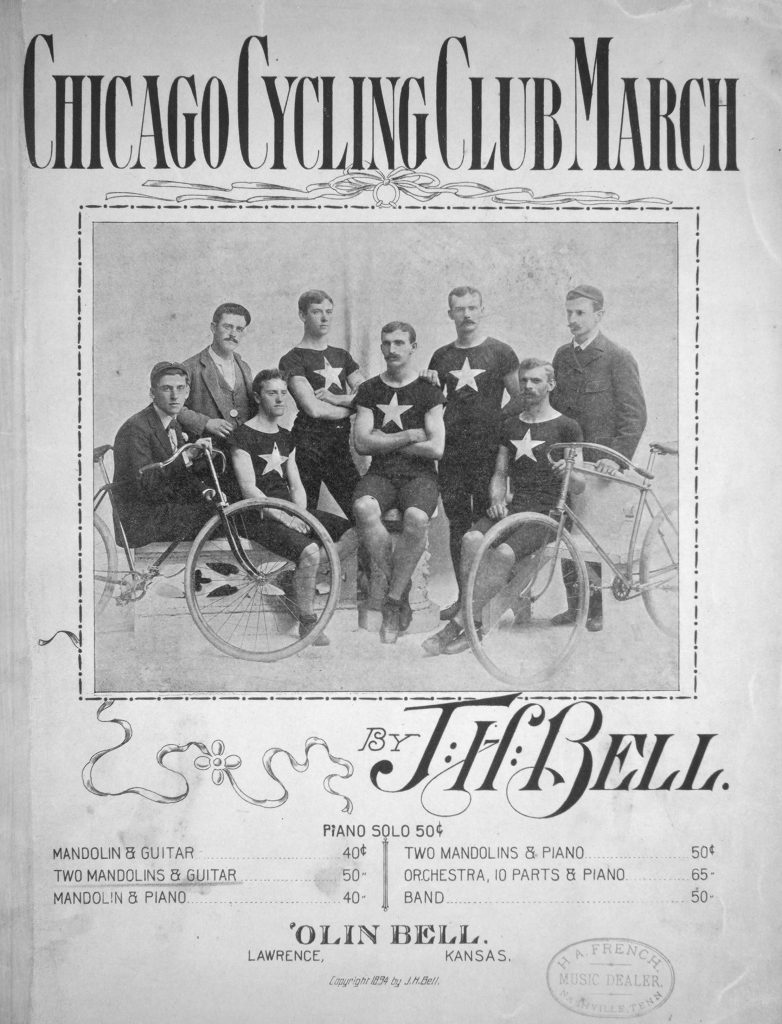 Chicago Cycling Club March was published in 1894 in Lawrence, Kansas—a town not often seen in publishing. We can also see the stamp of the store it was purchased from—H.A. French in Nashville, TN. There are many versions of the song, but this one is for two mandolins and guitar.

Bicycle races occurred frequently according to period newspapers. According to a “Wheel Notes” (Atchinson, KS) 1888, “Three of the Chicago cycle clubs, the Fort Dearborns, the Owls and the Chicagos, have combined under the name of the Chicago Cycling club, which, with a membership of 250 and valuable club properties and connections, at once assumes a commanding position among western cycling organizations, and will perhaps bear comparison with any cycle club in this country.” 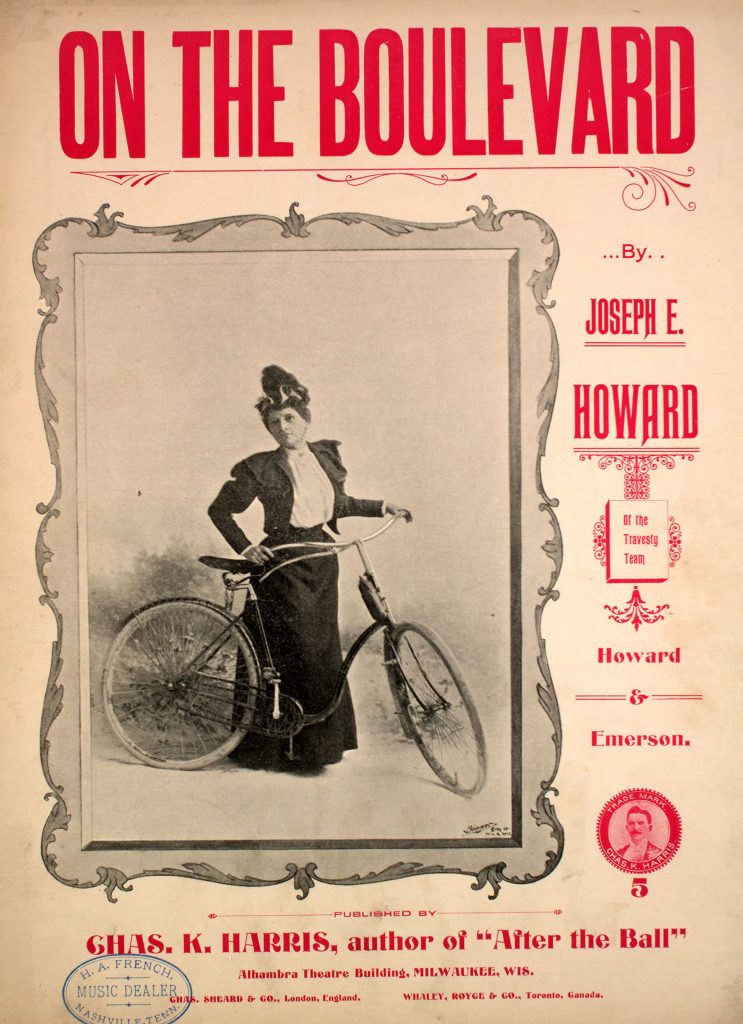 Another song purchased from H.A. French in Nashville, On the Boulevard was published in Milwaukee, Wisconsin 1897. The woman on the cover isn’t identified, and another version at the New York Public Library has a different cover. The composers of the song, husband and wife duo Howard and Emerson, also wrote “Hello Ma Baby” in 1899 (originally a minstrel song). 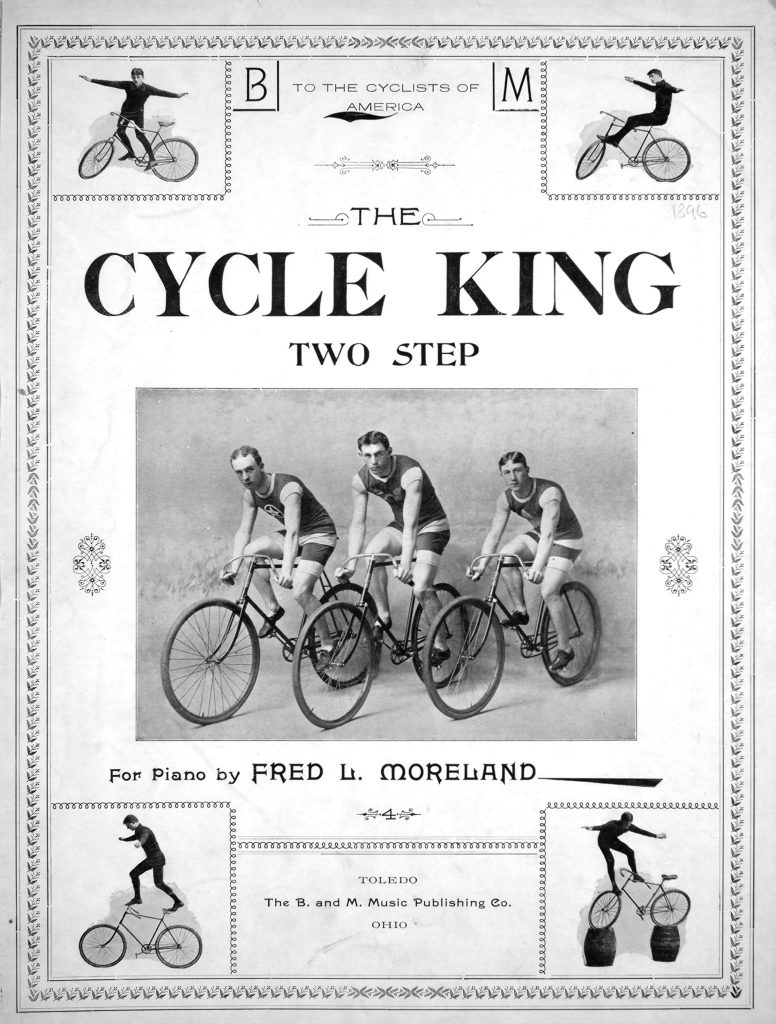 The Cycle King was published in 1896 in another atypical city—Toledo, Ohio. Dedicated to the Cyclists of America, the cover shows a performer doing a series of tricks on a bicycle, including balancing on two barrels. 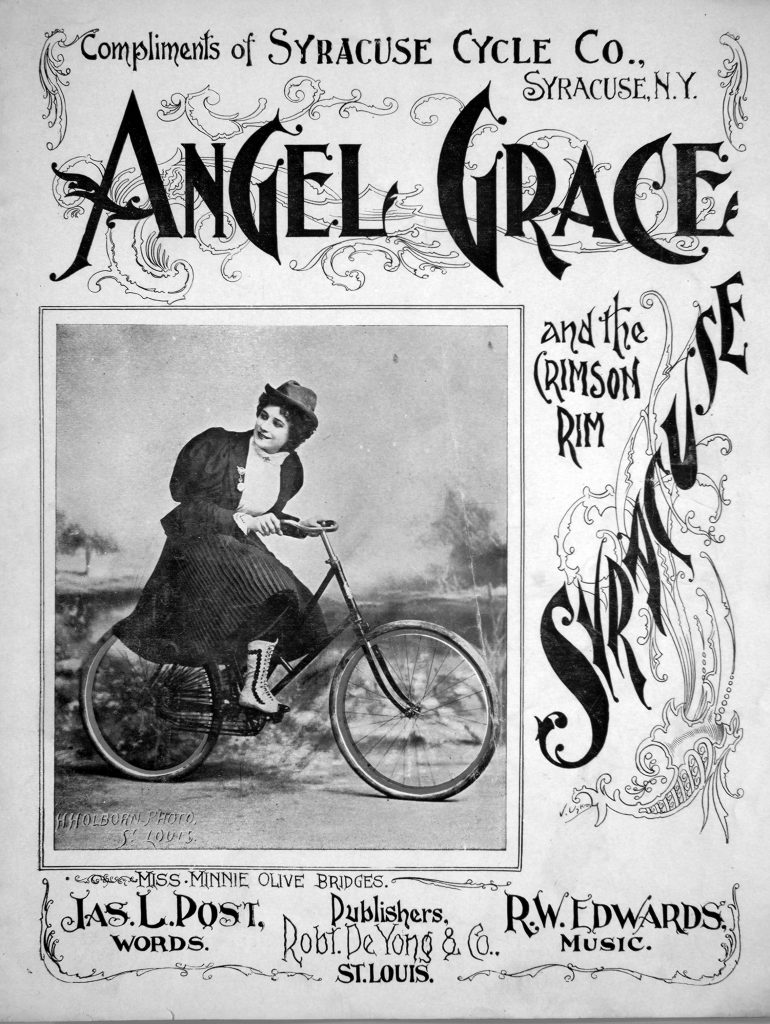 Angel Grace and the Crimson Rim—a title that sounds like the latest Marvel superhero movie— was published in St. Louis, 1895. The biker on the cover is identified as “Miss Minnie Olive Bridges.” According to the chorus, “Her name is Our Angel Grace, She leads in every race, On the road she sets the pace, With her crimson Syracuse Wheel; Go north, south, east or west, Her time is always the best, and she will lead the rest, for she rides on a Syracuse Wheel.” 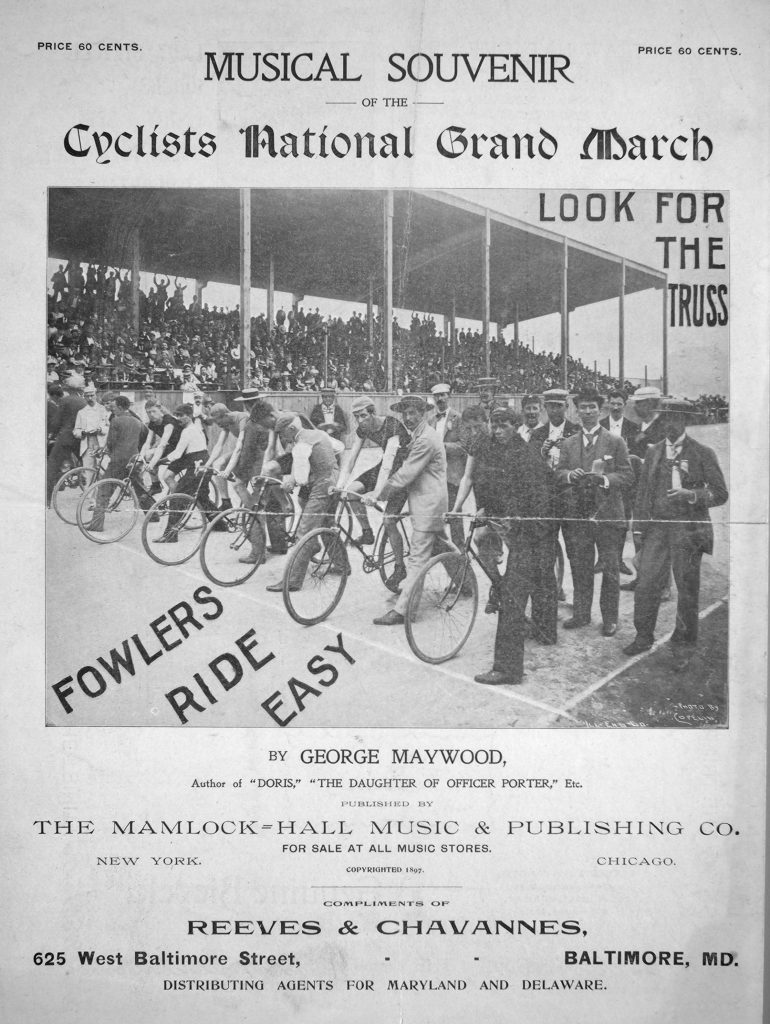 Bringing us back to Baltimore is the Cyclists National Grand March, 1897. The photo on the cover shows the race just about to begin, with fans in the background waving their arms to solidify their place in cycling history. The song was offered by Reeves & Chavannes, a bicycle dealer at 625 W Baltimore Street (Now the location of the UMD Medical Center).

You may have noticed that all of these songs were published in the 1890’s– this is because the decade saw a bicycle craze which built up a new culture around cycling. The biking culture has remained in Baltimore– the city was even selected to host a major cycling race, the Maryland Cycling Classic, in 2022.