The Levy collection contains over 2,000 songs published in Baltimore, including some historic depictions of Baltimore’s landmarks and monuments.

Fifth Regiment March was published by one of the most prolific sheet music publishers in the city, F.D. Benteen. The cover shows the Washington Monument in Mt. Vernon– the monument was built between 1815 and 1829, with the ornate fence installed 1836-1838. Houses began to be built on the square in 1829—this cover shows a house on the Northeast corner, where a Methodist church now stands (completed in 1872).

The song is difficult to date, as there is no publication year printed on it. However, we know that Benteen took over from publisher John Cole in 1839 and died in 1864. On this song, Benteen lists himself as a successor to Cole, possibly implying it was published early in his tenure (in another song, presumably dated 1847, he doesn’t list himself as a successor to Cole). Therefore, the song was most likely published between 1839 and 1847, although I’m sure a dedicated Baltimore historian could more accurately date the cover based on the buildings present.

Another song by the same composer is The Baltimore March, also undated. This cover shows the battle monument on Calvert Street, built in 1815. The monument, in Egyptian and Roman styles, has two reliefs showing the battles of North Point and Fort McHenry. It also lists the names of the 36 Baltimore soldiers who died in the defense of the city during the War of 1812. The monument was originally topped with a statue of a woman, which was moved to the Maryland Center for History and Culture and replaced with a replica.

Interestingly, the bottom of the cover seems to read “Published by John Cole, Balto.” However, the inside title claims it was published by Geo. F. Cole. It was common practice for a sheet music publisher to sell their engraving plates and other materials to their successor, which is likely what happened in this case.

The Sun Quick Step was published in 1854 with a cover lithograph by Hoen & Co. This cover shows the Baltimore Sun building (also known as Sun Iron Building), built by A.S. Abell in 1851 as one of the first iron buildings in the United States. The building was unfortunately destroyed in the 1904 Baltimore fire.

The first page of music notes the song was made popular by the “Independent Blues Band.” Many period newspapers mention this band, which seemed to mostly play on cruises. However, the name does not refer to the genre we now know as the blues, which wasn’t popularized in sheet music until the 20th century. Instead, this song is in the style of a march called the quick step (also not to be confused with the modern quick step). 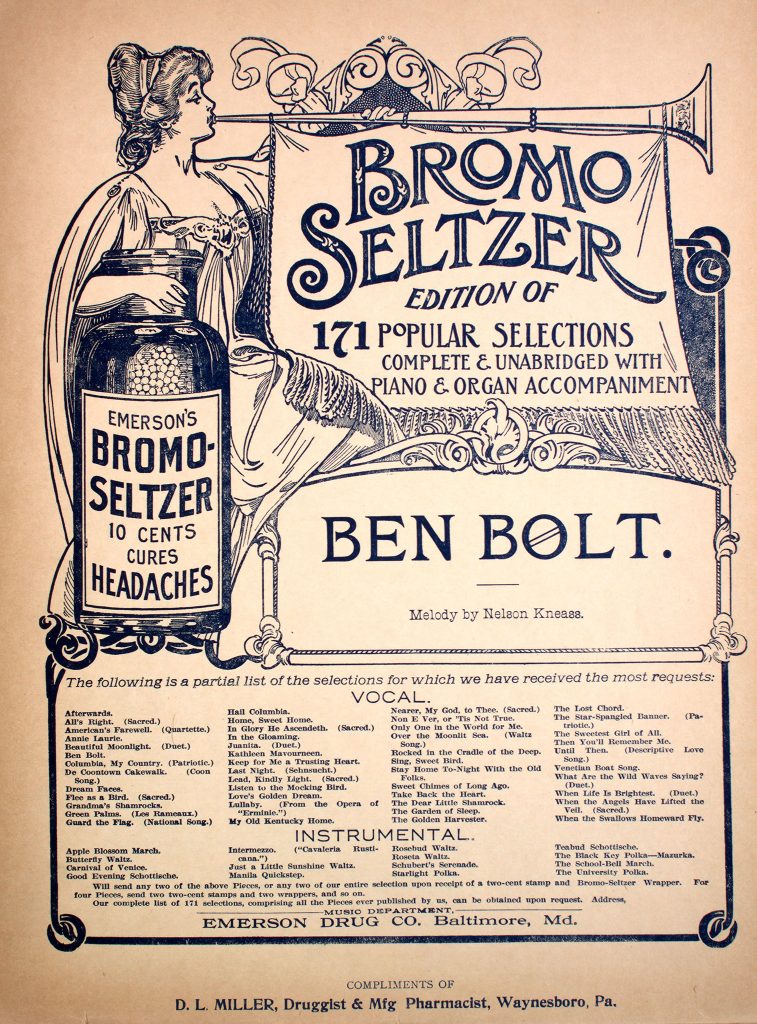 The clock tower was built in 1911, modeled after the Palazzo Vecchio in Florence. It also had a 20-ton revolving bottle at the top covered in lights, but the bottle was removed for structural concerns. To help advertise the medicine, the company created a music department that churned out cheap copies of popular songs.