The original Ferris wheel was unveiled at the 1893 World’s Fair in Chicago, designed by George Washington Gale Ferris Jr. Leading up to the fair, the revolutionary attraction was heavily advertised in the Chicago Daily Tribune– it first appeared in print on February 25, 1893 (2 months before the fair opened): “On the Midway Plaisance there will be shown next year (sic) an exhibit which is intended to rival in novelty the Eiffel Tower. This will be the Ferris wheel”

A few weeks later, on April 10, the Tribune reported throngs of people watching progress on the “tremendous iron framework of the Ferris wheel and workmen who were swarming around up in the sky like ants. People stood around it in a solid mass and gazed skyward till their necks ached and their supply of Ahs and Ohs gave out.” Although the fair opened in May of 1893, it appears the wheel hadn’t yet been finished as of June 7: 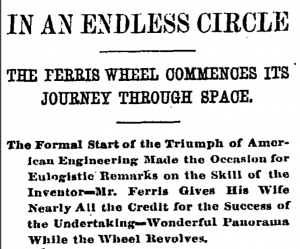 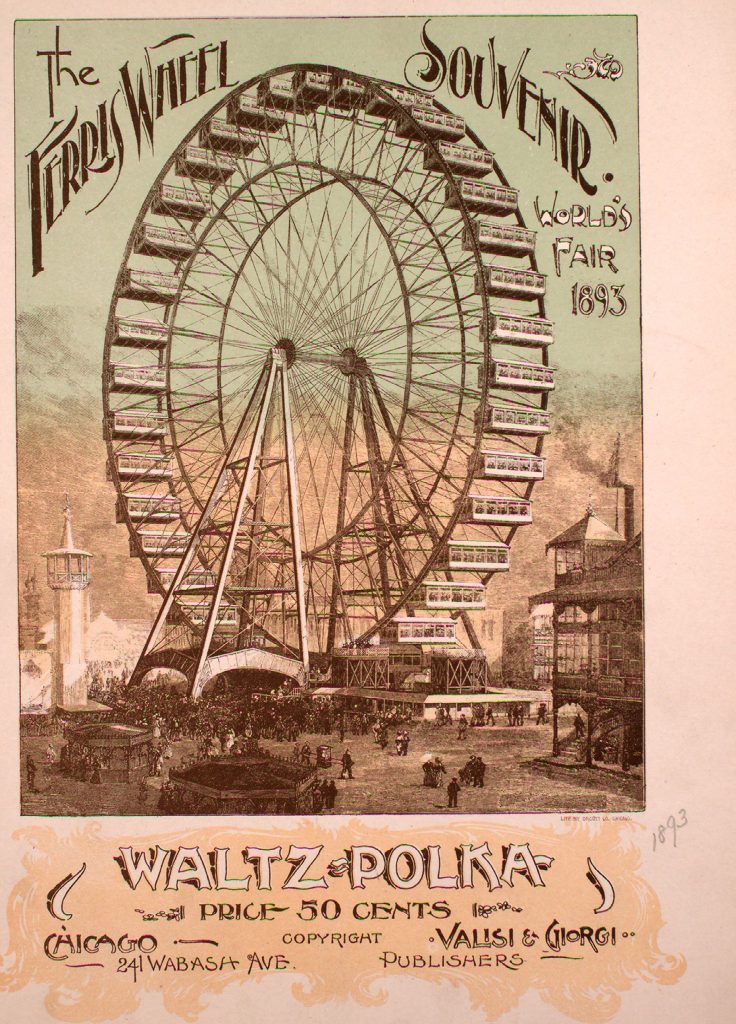 The Ferris Wheel Waltz was published in 1893 in Chicago to celebrate the new ride. I was surprised by the size of each carriage (it is reported in the Chicago Tribune that each could fit 60 people). We can also see a massive crowd of people at the base of the wheel, implying the high level of public trust in the construction. The image is identical to one that appeared on August 27, 1893 in the Chicago Tribune.

The lyrics of the song describe a couple enjoying the romance of the wheel, noting that it serves as a distraction to the stresses of daily life– the end of the first verse is “Back to the Earth and its yearning, Back to earthly care and debt.” Behind the lyrics, the melody of the song rises and falls, mimicking the turns of the wheel.

It appears this was sold for 50 cents apiece at the fair, as the cover labels the song a souvenir—the exposition was open for a duration of six months, so the song could have easily been printed in time. 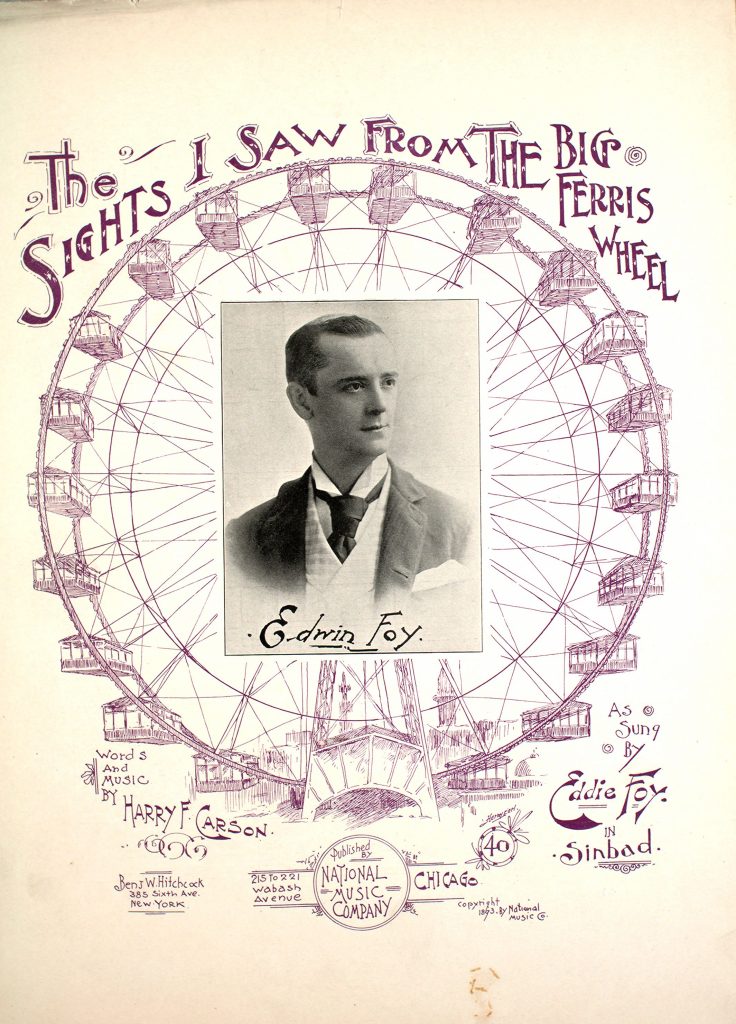 The Sights I Saw from the Big Ferris Wheel also celebrates the 1893 fair. It has a far less detailed lithograph– the cover instead focuses on the performer (Edwin Foy) in the middle. Celebrity endorsements were frequently used to market songs in this way.

This song was also published during the fair, as it entices audience members to visit the wheel: “Some very queer things I now will reveal, of sights that I saw from the big Ferris Wheel. If you don’t believe the things that I cite, You can see for yourself from the wheel any night.” The rest of the song describes the visitors from all around the world and their respective food and dancing. A third song was published about the 1893 Ferris wheel, depicting it at the center of the fair. 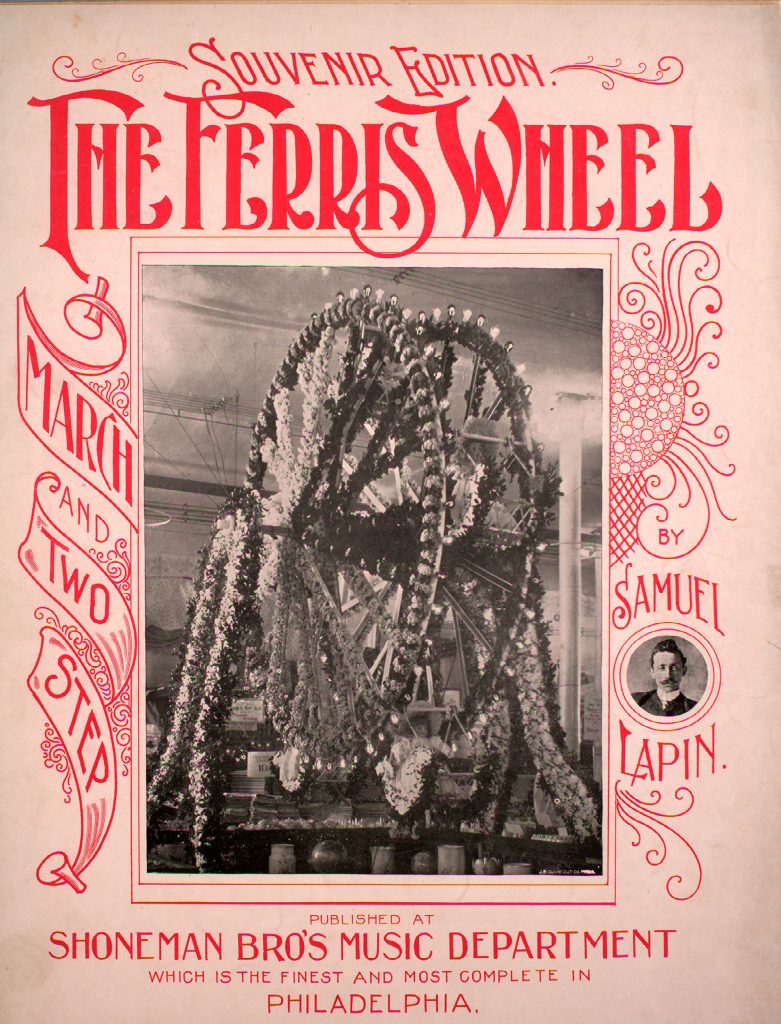 Six years later in Philadelphia, the Ferris Wheel March was published. The wheel in this photo is clearly much smaller, and it appears to be decorated in flowers and lights while being supported by a maze of wires and supports. It’s not clear if this was actually used or if it was just for decoration— it appears to fit only one slightly creepy doll on each bench.

Nowadays, there are Ferris wheels all over the world. The current record-holder for the tallest wheel belongs to the High Roller in Las Vegas Nevada, which is over twice the height of the 1893 wheel.