Over the past year, the pandemic has given me plenty of time to re-watch all of my favorite movies. In revisiting Rodgers & Hammerstein’s The Sound Of Music, I rediscovered the delightful puppet show set to a song called “The Lonely Goatherd.”

Inspired by this adorable scene (and because everybody loves puppets), I thought I’d explore the Levy collection to find every song I could about puppets. 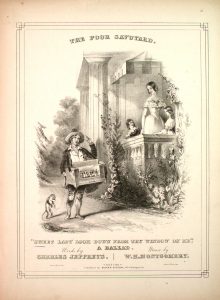 One of the earliest songs in the collection that appears to depict puppets is The Poor Savoyard, circa 1840. The narrator of the song is the boy seen on the street, addressing the clearly wealthy family above him: “Fond parents had I, but they sleep in one grave, and therefore sweet lady, thy pity I crave.” In addition to his pet monkey, the boy has a box hanging around his shoulders with small figures inside—it appears to be a mini puppet theater.  Since the entire song is from the perspective of the boy, it’s possible that this box even produced his accompaniment. A similar image exists from 1892 of an organ grinder with a monkey, but without any small figures in the box. These mini-organs used a rotating wooden barrel with small pins, combined with a bellows to create a tune. 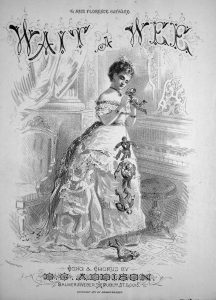 Another cover that appears to show puppets is Wait A Wee by D.C. Addison, published in 1877. The song is in an Irish dialect, and includes an introduction above the music: “A little Highland girl being asked the meaning of the word ‘Patience’ replied ‘Wait a Wee, and dinna weary.’”

The cover shows a woman in front of a piano (I won’t digress on the gigantic keys of the instrument) with a series of well-dressed men on a string. The man in her hands appears to be pleading, as his companions are tumbling to the ground. Interestingly, the lyrics of the song don’t address the puppets (who may be romantic suitors) at all. 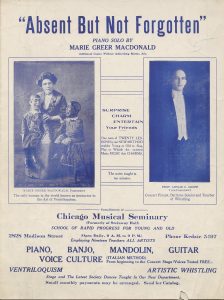 After finding the two above songs, I could not have been more pleased to find a photograph of 20th century puppets in the collection. Absent, But Not Forgotten is a piano solo by Marie Greer Macdonald, pictured left with her two puppets. The tagline below her notes she is “The only woman in the world known as instructor in the Art of Ventriloquism.” The song is an advertisement for the Chicago Musical Seminary, offering lessons in ventriloquism, artistic whistling, voice culture (voices tested FREE!), and various instruments. A few fliers from the school have since made their way to eBay, including a booklet for The Chicago School of Ventriloquism listed at the same address. Ad advertisement in the Chicago Daily Tribune (March 3, 1878) announced the musical seminary’s opening, listing “J.H. Macdonald” as the principal—the latest advertisement I found for the school was in September 1938.

Marie Greer Macdonald composed other songs as well, including one titled “Sweet Mabel Waltz,” possibly also to distribute in promotion of her school. A story in the Chicago Daily Tribune in 1901 details Macdonald’s successful divorce from her husband after “the sisters of a Catholic convent broke up my home.” Macdonald tells the Tribune that her songs, including this one, were “written with her heart’s blood.”

While ventriloquism may no longer be a standard feature of performing arts education, puppetry continues to be a widely practiced art form (including Baltimore’s Black Cherry Puppet Theater). And for the record, I would happily sign a petition to create a JHU degree in Puppet Studies.