Growing up in Arizona, my family would often travel out East to visit relatives. A highlight for me was always New York City, where I developed my childhood love of skyscrapers and fear of pigeons– whether they were coming after the soft pretzel I was eating or shoving each other in front of trains (don’t worry, the victim survived unscathed).

I’ve since made peace with the birds, so I was pleased to find a few songs in the Levy Collection celebrating pigeons– specifically, homing pigeons. I was surprised to learn that pigeons have been used to carry messages throughout history and ancient text, from Noah’s ark to Genghis Kahn. According to Pigeonpedia, pigeons have an innate sense of home and can find their way back over thousands of miles, making them ideal for carrying messages over long distances. This has helped them save thousands of lives, but they’ve also been used to simply send love messages. As messengers of love, carrier pigeons found their way into popular culture through sheet music. 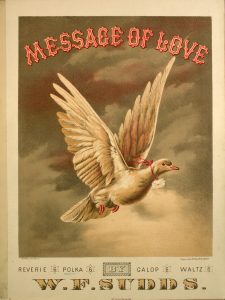 This polka from 1887 has a gorgeous lithograph on the cover. There’s no text to the dance, and there’s nothing in the melody that’s particularly pigeonlike (pigeony?) Perhaps the ornate cover was just a marketing tactic, as it would surely stand out in a music shop window. There are also markings over some notes to indicate which finger should be used to play them, implying an educational aim. We can see that the song was sold in three other forms—reverie, galop, and waltz. 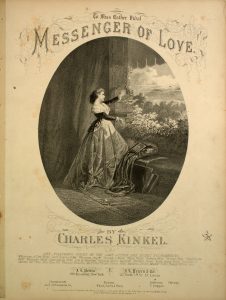 This dance with an almost identical title has another extremely detailed lithograph (this one is from 1871). The song is dedicated to Miss Esther Vidal—perhaps the composer intended the song itself to be a message of love. 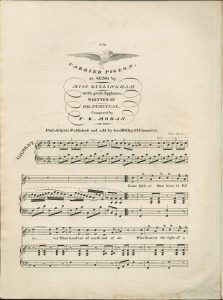 “Carrier Pigeon” was published by one of the earliest sheet music producers in Philadelphia, George Willig. The song isn’t dated, but Willig lived from 1764-1851. The song reveals that carrier pigeons were fed much better than their New York descendants—the narrator rewards the pigeon in the second verse: 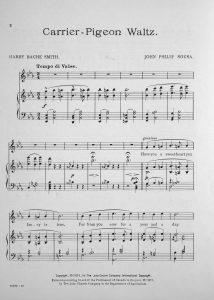 A 20th pigeon-related song in the collection comes from 1906, composed by the king of marches, John Philip Sousa. Rather than taking the perspective of a lover, the narrator of this ballad is a pigeon seller addressing an insecure customer. “Have you a sweetheart you fancy is true, Far from you now for a year and a day. Yours were they promised, but whose are they now? Come, buy a pigeon to send to your dear.” The narrator keeps reminding the potential customer of everything he misses about his far-away lady, eventually collapsing into a Black Friday-esque plea: “Buy, buy, buy, buy, buy, buy, Oh purchase a carrier dove and see.”

I was pleasantly surprised to learn that carrier pigeons still exist today, from the American Racing Pigeon Union (pigeon.org) to a service that allows you to send pigeongrams. Want to learn more?