The 1912 sinking of the Titanic immediately caught the attention of the world press. It also came during an era of sheet music production that constantly churned out new songs related to world events— elections, celebrities, disasters. Therefore, it is no surprise that the tragedy made its way onto numerous sheet music covers. Some of these songs recount the tragedy in musical form, while others add fictional elements of lost love. Most of them contain the well-known theme, “Nearer My God to Thee” that was rumored to have been played by the ship’s string quartet as it sank. 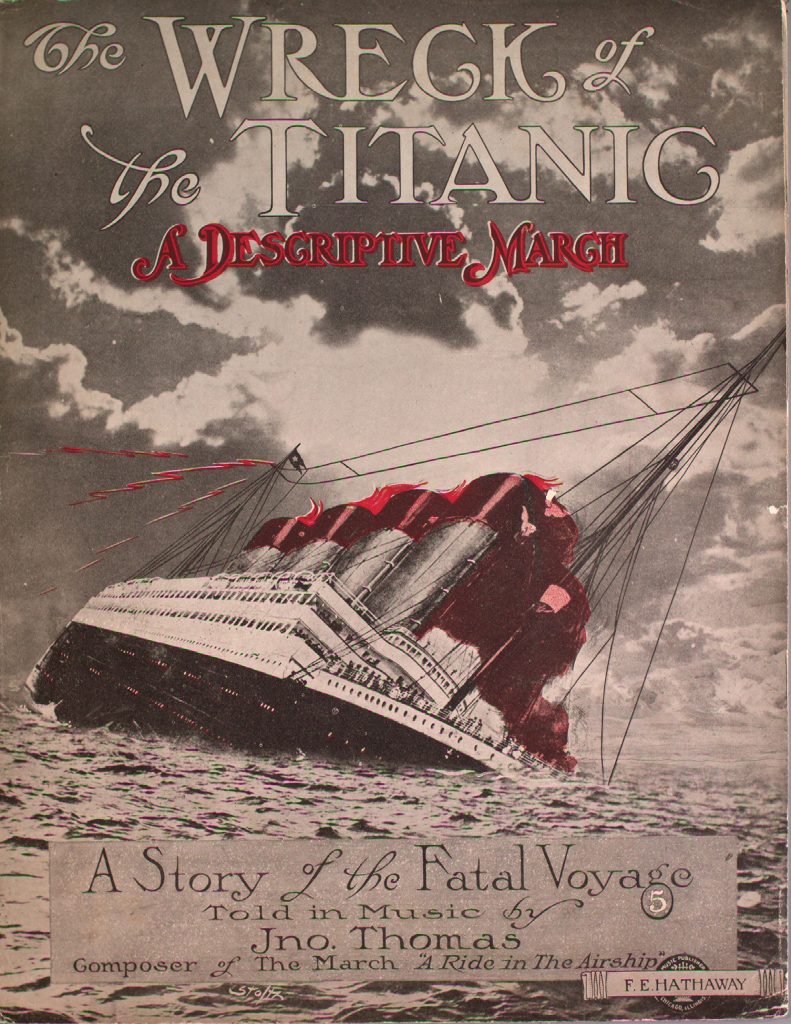 The Wreck of the Titanic markets itself as a “descriptive march,” intended to allow families to recreate the dramatic event in their own living room. Like other programmatic songs we’ve explored on this blog, this one labels each section of music with the corresponding event—it starts with tourists entering the ship, followed by the ship speeding over the ocean. Next, loud and dissonant chords signify the iceberg being struck and the string quartet plays “Nearer My God to Thee.” Descending chromatic lines illustrate the ship sinking, and the Carpathia arrives to rescue the survivors. 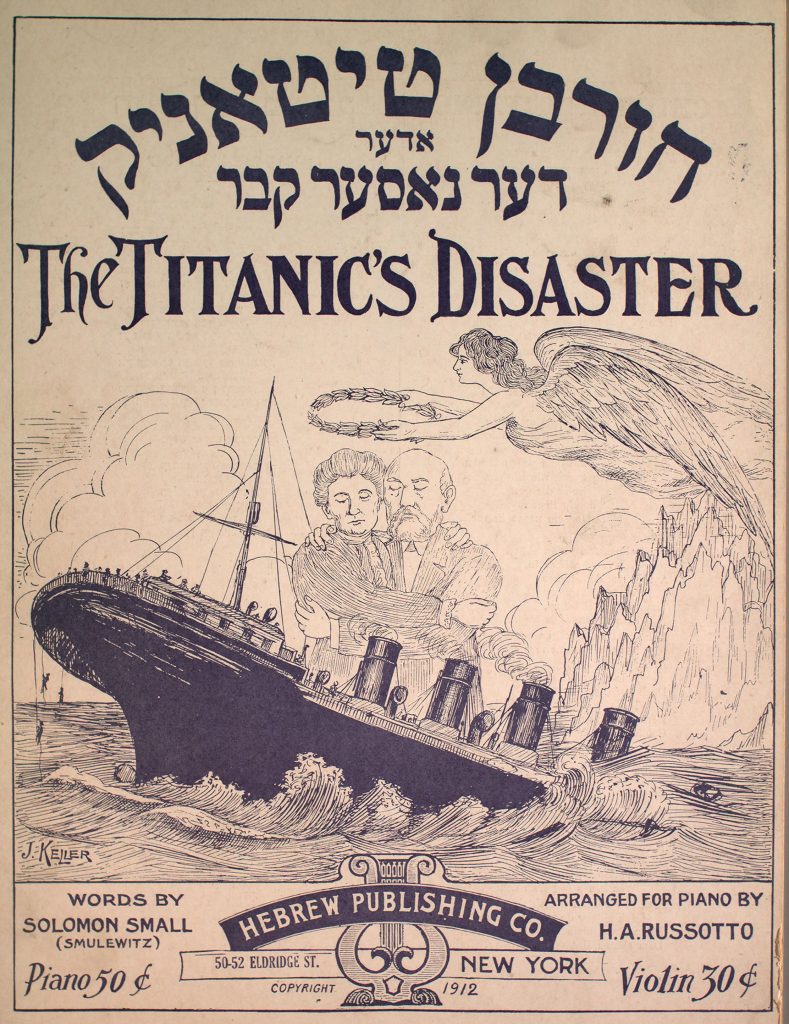 The Titanic’s Disaster, published by the Hebrew Publishing Company in lower Manhattan, is written in Yiddish. The song is a tribute to a passenger named Ida Straus, who died on the ship with her husband Isidor (a co-owner of Macy’s department store). The Library of Congress has translated a section of the song:

“Man, you are no match for the cold ocean’s power. It is a wet and deep grave. Shed tears for all the lives lost. And for her noble courage, all should honor and remember the name of Ida Straus.” 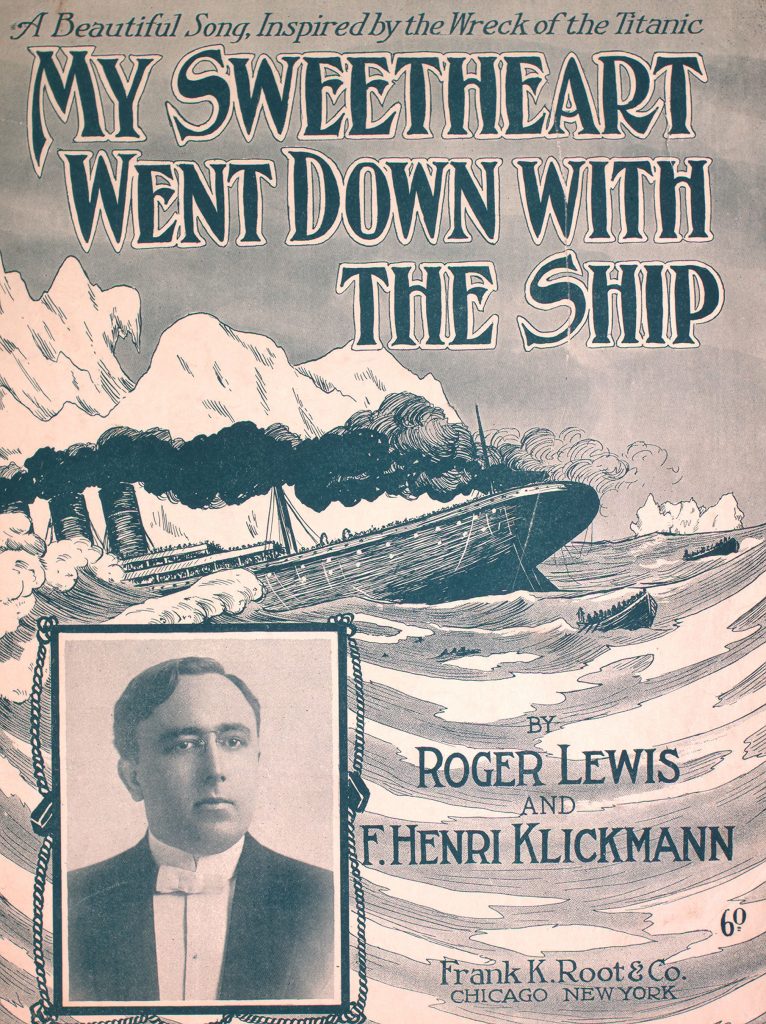 My Sweetheart Went Down With the Ship adds a fictional story of lost love to the tragedy. A presumably female narrator tells of her sweetheart’s brave sacrifice in giving up a spot in a lifeboat:
“Out in the sea, parted from me, down in the deep he is sleeping. Fearless and brave, his life he gave, and the angels their watch will be keeping.” 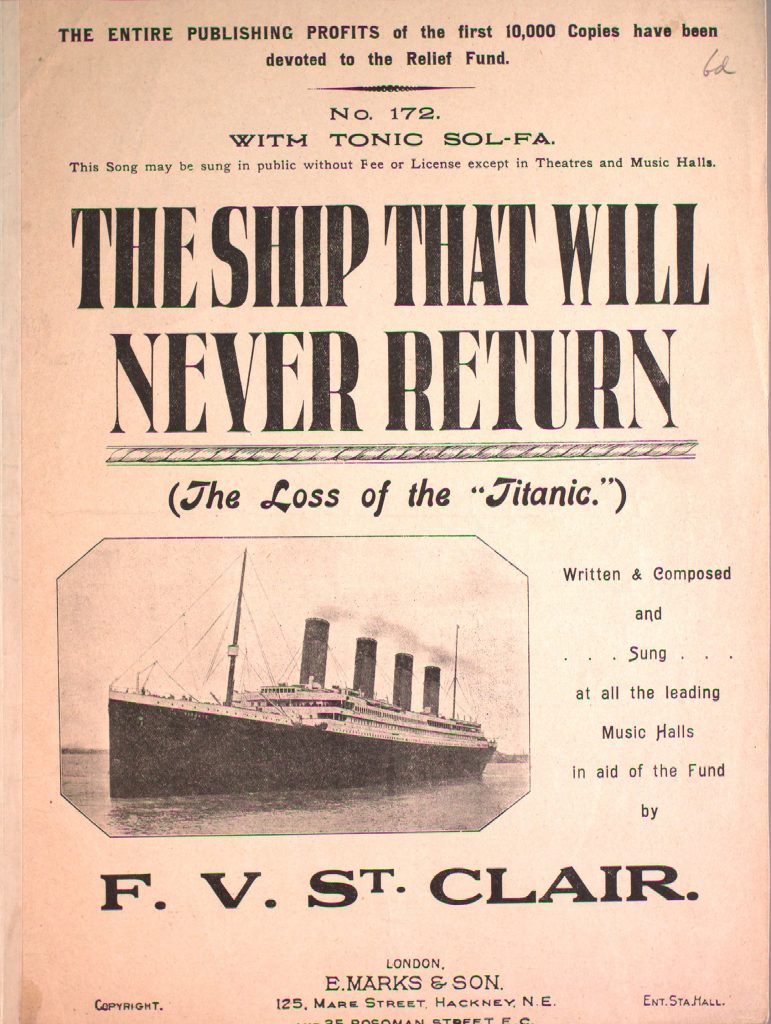 Unlike the rest of these songs, The Ship That Will Never Return was published in London. Featuring a photo of the Titanic on the cover, the song supported the relief fund, providing aid to those who lost family members. To make the song as accessible as possible, the publisher included solfege above each note (do, re mi, etc.) and made the piano part quite simple.

Of course, there are numerous other examples of calamities making their way onto sheet music covers, ranging from fires and volcanoes to cyclones and floods. This trend continued with the popularization of radio and recorded music– here are a few modern songs written about disasters.