Scrolling through the alphabetical list of subjects in the Levy collection, one that caught my eye early on was “aerialists.” I wasn’t expecting to see many songs in this category, and I certainly wasn’t expecting to find a few stunning lithograph covers: 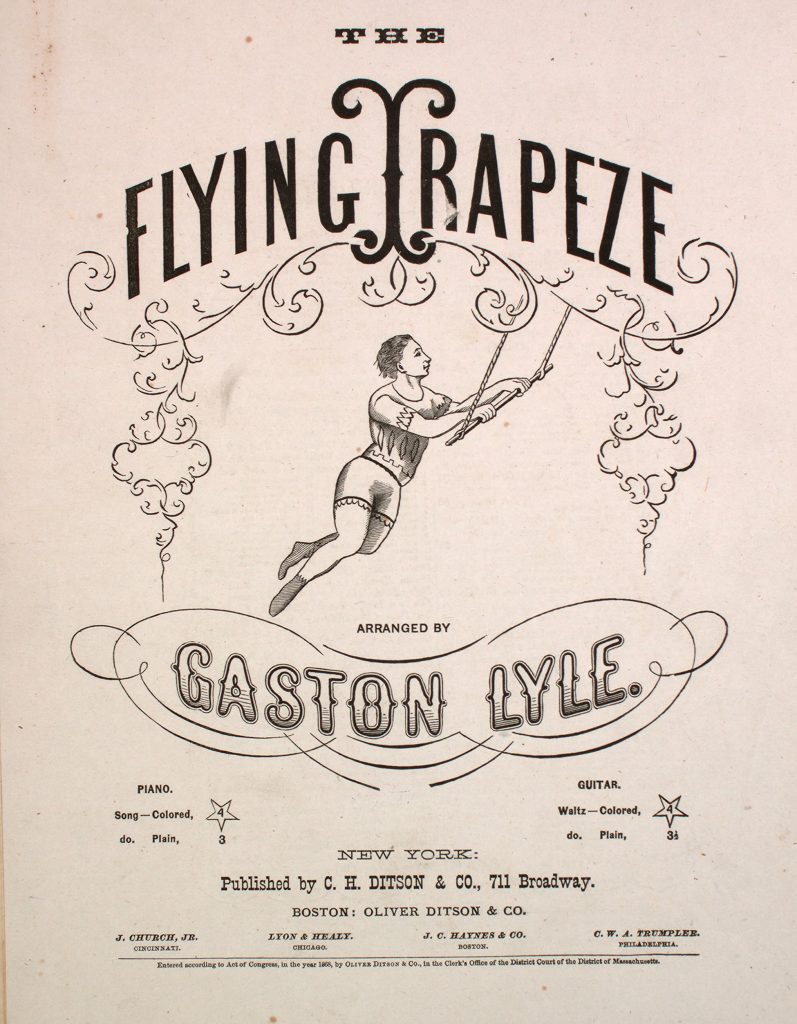 One immensely popular song seems to have been “The Flying Trapeze,” published in 1868. We have multiple versions of this song in the collection, all with different covers and arranged in different versions (voice, piano, guitar, etc.). This lithograph shows a moustached trapeze artist flying through the clouds, and it’s unclear what the bar is attached to.

The song is a comic public service announcement, warning the audience about the romantic dangers of a trapeze artist. The narrator of the song has lost his partner to an aerialist—“His movements were graceful, all girls he could please, and my love he purloin’d away.” In the third verse, the bride’s parents try to convince her to stay with the narrator, but she runs away and eventually becomes a trapeze artist herself. 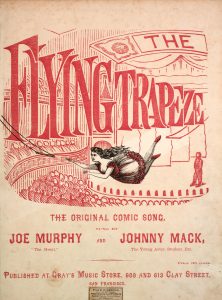 Another edition in the collection shows the end of the story rather than the beginning—here we see the narrator’s former bride jumping between two bars. Seemingly reflecting the narrator’s fears, the position of the aerialist in the lithograph makes the jump look precarious, almost as if she’s not quite going to make it to the next bar. 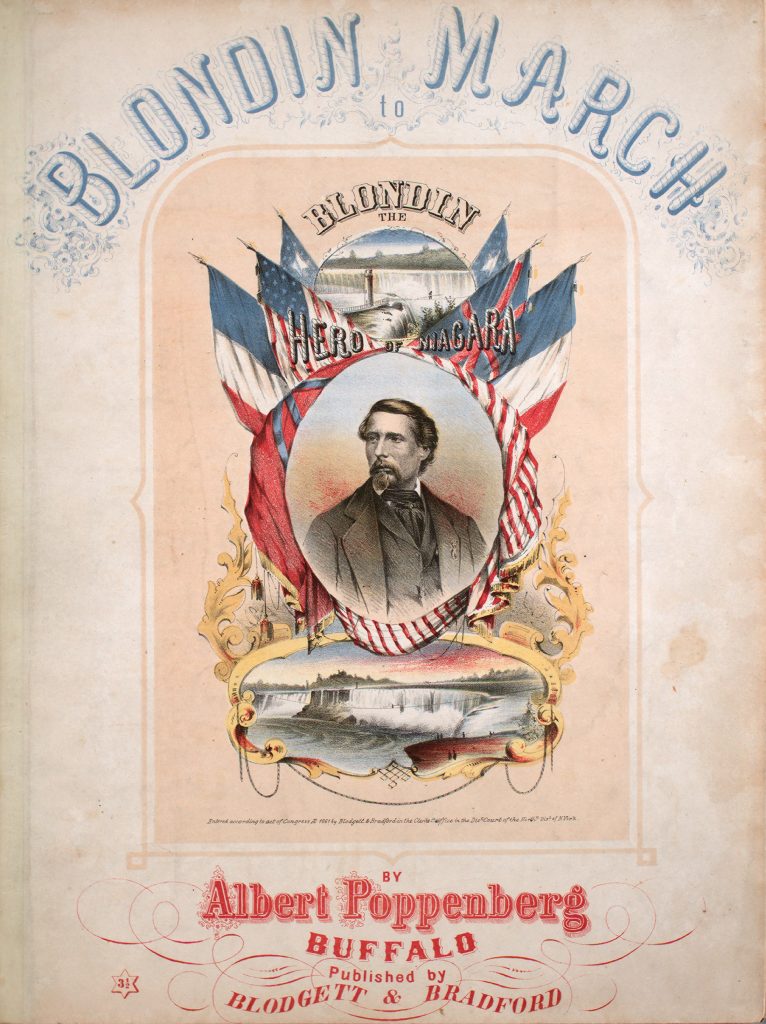 Blondin March is dedicated to Charles Blondin, the ‘Hero of Niagara’ who crossed the falls on a tightrope in 1859. He would later repeat the stunt with variations—backwards, blindfolded, carrying other people. It’s not surprising, therefore, to find him in the collection—as sheet music was an early form of social media, most famous figures from US history can be found on a song cover. 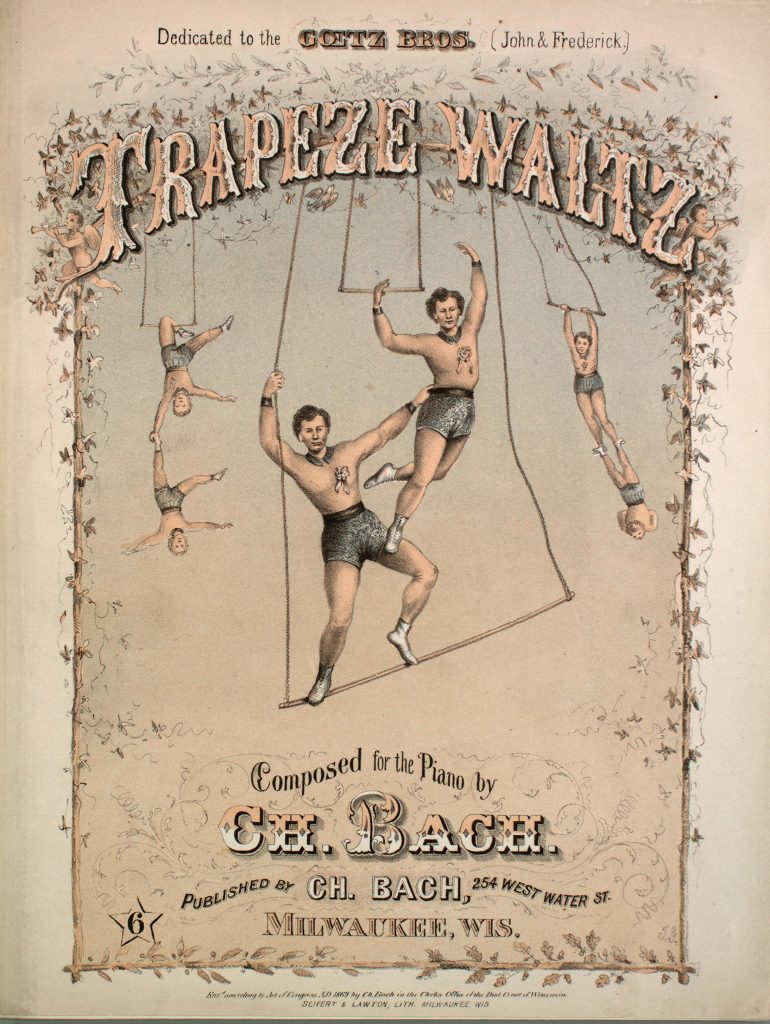 Trapeze Waltz, published in 1869, has a variety of aerialists on the cover. Although the song doesn’t have words, the music seems to reflect the art form—melodies continually rise and fall as if mimicking the performers. As trapeze performances almost surely included music, perhaps this song was used as accompaniment. 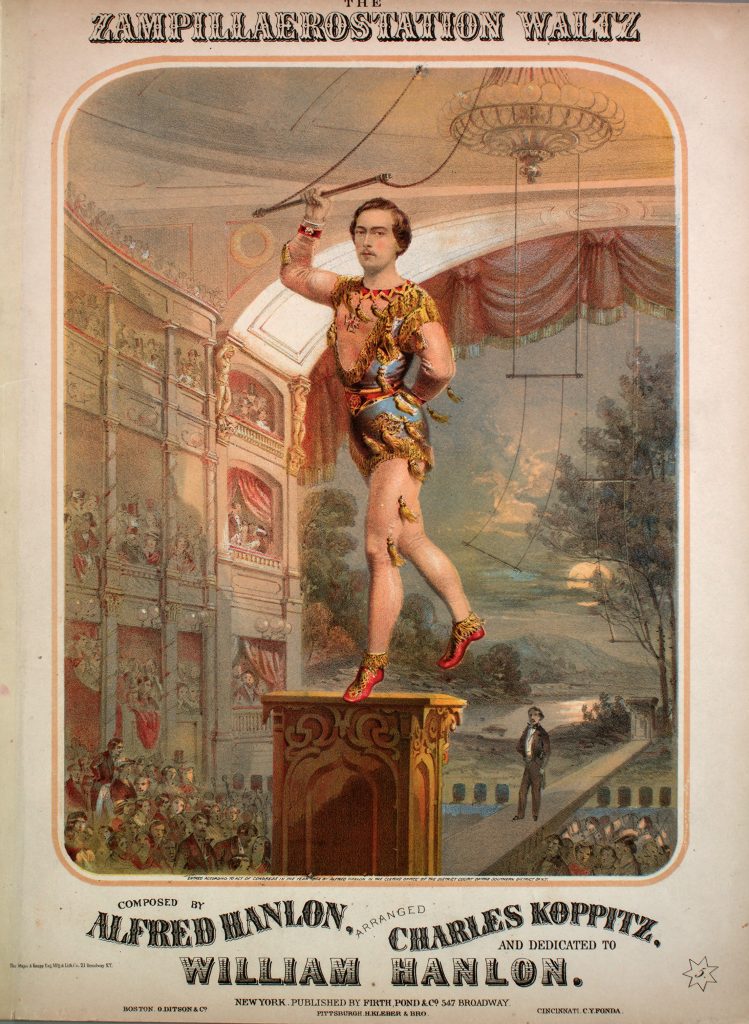 This cover from 1862 is one of the most ornate I’ve seen in the collection. The trapeze artist in flamboyant uniform stands on a platform in the middle of the audience. Behind him, a detailed set rivals even a modern staging at the Metropolitan Opera. Four levels of the theatre are crammed with audience members being attended to by butlers in tuxedos. The song is dedicated to William Hanlon, a young English trapeze artist. Wagner’s concept of Gesamtkunstwerk comes to mind here—this idea of the “total work of art” aimed to unite all of the aspects of a performance into a multisensory experience for the audience: music, drama, dance, costume, elaborate sets, all interacting with each other simultaneously. These ideas were published by Wagner and others in the 1850’s, so I wouldn’t be surprised if they came to influence American theatre in this era.

I was also fascinated to find that most of the songs in the collection featuring aerialists were published in the 1860’s. I was therefore not surprised to learned that the trapeze was invented by Jules Léotard in 1859—the same year of Blondin’s first crossing of Niagara Falls. It seems this decade saw a sudden and steep rise in excitement surrounding this new and daring art form that would continue to develop for the next 150 years.