With a sheet music mapping project in the works (stay tuned!), I decided to spend this week combing the Levy Sheet Music Collection in search of maps. 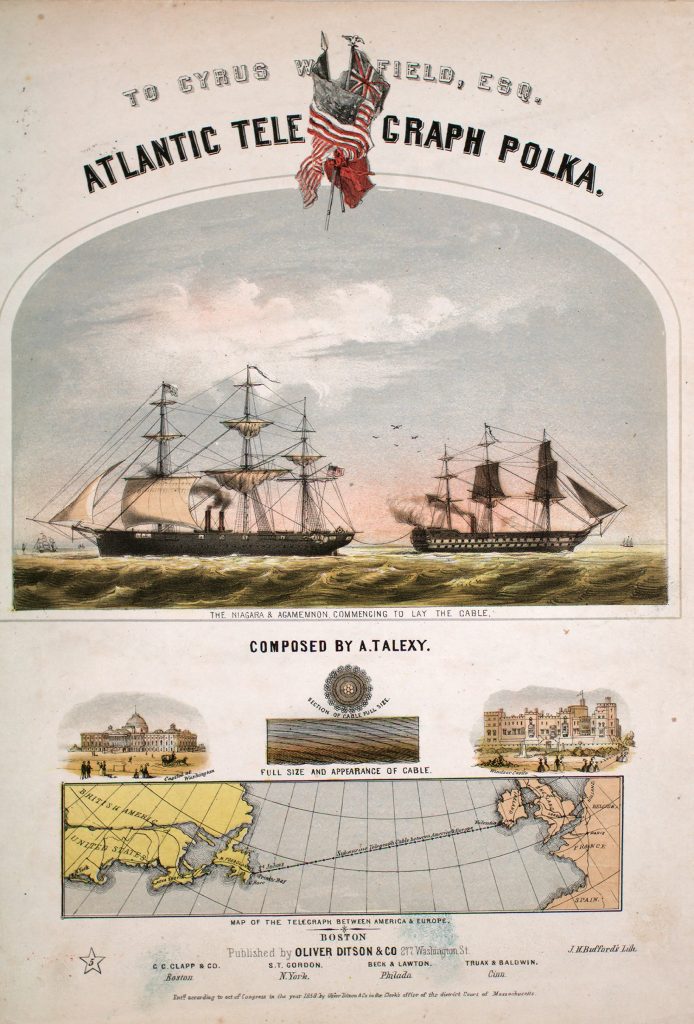 One of the first songs that caught my eye when looking for maps in the collection is the Atlantic Telegraph Schottisch. This stunning lithograph cover was done by John Henry Bufford and published by Oliver Ditson (Boston) in 1858. The song doesn’t have any words—instead, the cover itself seems to be a announcement about the new trans-Atlantic telegraph line. It’s dedicated to Cyrus W. Field, who created the Atlantic Telegraph Company and facilitated the new line—the first such cable to traverse the Atlantic.

At the top of the cover, we see the Niagara and Agamemnon (awesome ship names, for the record) spooling the line out mid-ocean, followed by drawings of the US Capitol Building and Windsor Castle. Between these buildings is a fascinating cross section and life-size drawing of the cable. These illustrations sit above a map of the new cable, stretching from St. Johns (Newfoundland) to Ireland.

I also noticed what appear to be fingerprints in blue and orange ink at the bottom of the cover—perhaps from carelessly removing the paper from the press or touching the lithostone (did Cheetos exist in 1858?). Ditson had a large distribution network including New York, Philadelphia, and Cincinnati—clearly, the laying of this cable was a dramatic event. The excitement surely reached a peak when Queen Victoria confirmed the successful laying of the cable by sending President Buchanan a transmission in Morse code.

Unfortunately, the excitement was short-lived—the cable broke down 3 weeks later. 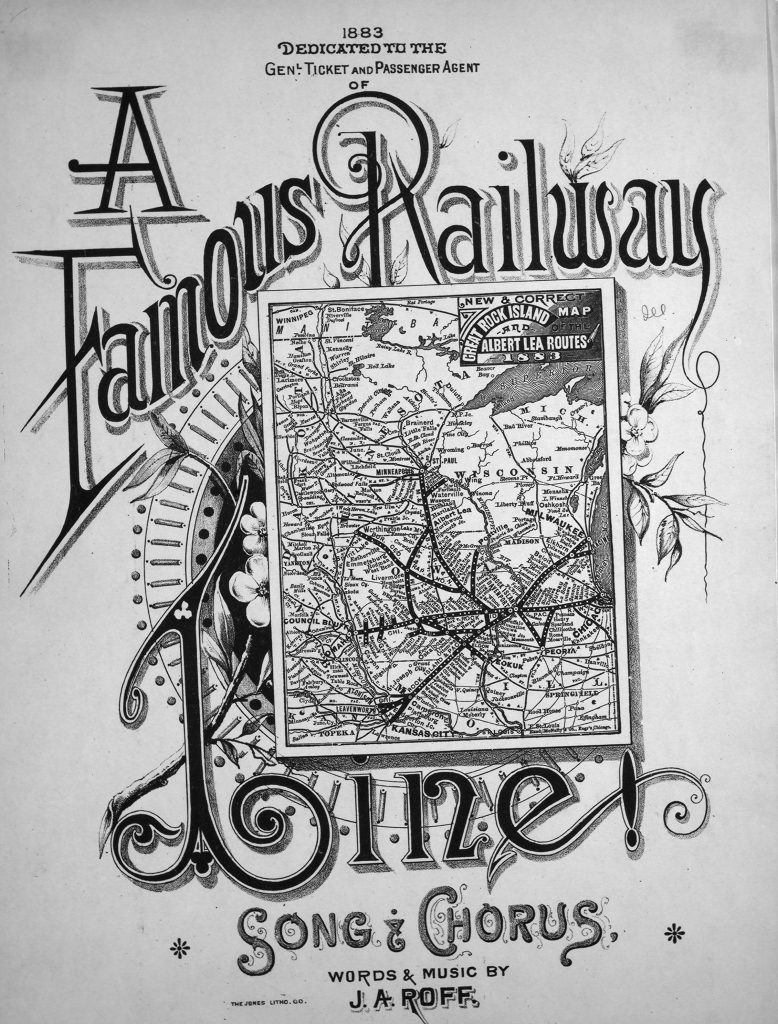 Songs were also composed to celebrate the country’s expanding railroad system. A Famous Railway Line was published in 1883, presumably in one of the cities shown in the map (most songs in the collection have a publisher and city located at the bottom of the cover, or a copyright statement at the bottom of the first page of music– this has neither.).

The top of the map notes it is the “New & Correct map of the Great Rock Island and Albert Lea Routes, 1883.” There’s a dizzying amount of detail crammed into this small map, including apparently every stop on the railroad. Rather than dedicating the song to a single person, it’s dedicated to the “General ticket and passenger agent” of the railroad.

While it seems this was published simply to spread the word about the railroad routes, a lot of work went into the song as well. Five verses and a chorus celebrate the railroad’s “magic name resounding through the land.” 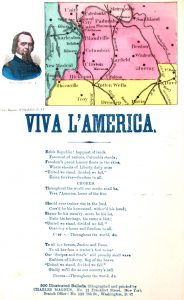 An even earlier railroad can be seen in this undated song sheet, titled Viva L’America. Song sheets were typically smaller than full-blown sheet music and contained only text, making them cheaper and easier to produce. Most often, they’d list a commonly known tune at the top (Yankee Doodle, for example) and newly written text that could be sung to the tune—this song has no such melody listed. The publisher, Charles Magnus, created lithographs for various mediums, including maps— his work can be found in many collections and online marketplaces. This song seems to be dedicated to Union general John Pope (1822-1892).

The map shows the border between Missouri (blue), Illinois (pink), Kentucky (red), and Tennessee (yellow). Pope was active in this region in the early years of the Civil War, capturing the city of New Madrid, Missouri in 1862. A few other editions of this song in the Levy collection show different Civil War generals next to a relevant map. 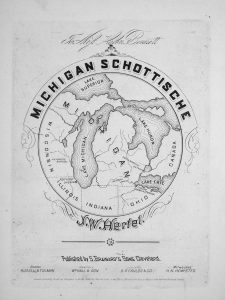 Yet another song to come out of the Midwest is the Michigan Schottische (a schottische was a common dance, akin to a slow polka).

It’s unclear if this song is celebrating something specific about Michigan, or just the state itself. In fact, the song wasn’t even published in Michigan (S. Brainard’s Sons Publisher was located in Cleveland). 1860 wasn’t a particularly exciting year for the state, although it was the year Abraham Lincoln was elected president. The dedicatee, Mrs. Helen Bennett, doesn’t seem to have been a famous Michigander, and the composer J.W. Hertel wasn’t a famous songwriter. Overall, just a lovely song for a lovely state.

Unfortunately, it seems the days of publishing music to celebrate maps are over. However, if Baltimore City ever releases a hit single to celebrate the opening of a new I95 exit, I will update this post accordingly.