Questions With Your Librarian: Heidi Herr 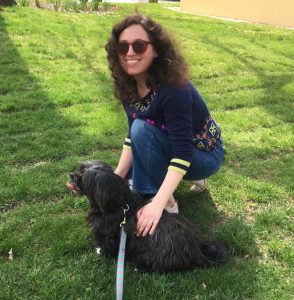 Who are you and what do you do?

My name is Heidi Herr, and I am the librarian for English and Philosophy. I am also the Outreach Librarian for Special Collections, so I get to come up with fun ways to connect undergraduates with primary sources.

Tell us a little about your background.

I have lived my entire life in Baltimore City, so I am a great fount of knowledge when it comes to recommendations for doughnuts!

What is part of your job that people may not know about?

People are surprised that it is such a social job! There is still this strange stereotype that librarians are lurking behind bookcases ready to “hush” anyone who walks by, or that all we do is sit at desks quietly reading books, but at least in my experience, that is not the case at all. I spent a lot of time talking to people about their research, collaborating with students to plan awesome events like the edible book festival, and attending meetings and workshops that are centered on improving library services and experiences for our community.

What’s the best part about being a librarian?

There are so many best parts, it’s bananas! Talking to students about their research, creating opportunities and programs that showcase the library and student excellence, working with the world’s best colleagues, and of course, the books, be they in print or in e-form!

What if your favorite hobby?

I love collecting movie posters, especially Swedish posters from the silent era through the early 1930s. The artwork is incredible, vibrant, and often surprisingly modern.

You have to eat the same thing every day for the rest of your life. What is it?

Ebelskivers filled with apricot jam and topped with maple syrup.

If you could travel in time, what event/time period would you visit?

I would go back to early 1920s Hollywood and become the librarian and confident of silent film actress, bibliophile, and director Mabel Normand in order to discover what, she knew about the murder of director William Desmond Taylor, the cocaine rackets of Hollywood, as well as getting the lowdown on what is was like directing Charlie Chaplin!

What’s the best concert you’ve ever seen? What made it special?

I saw Pulp at Radio City back in 2012. It was so incredible, even though Russell Senior, Pulp’s guitarist/violinist, wasn’t there. I was hoping he’d show up as I assumed he’d wear a spectacular medallion. One of the things that made it so special really and truly was the kindness of strangers. A nice couple gave me a spare set of tickets for orchestra seats — at first I was wary, but then I figured that the worst thing that would happen is that I would be sitting with members of some sort of cult dedicated to propagating a beet/onion hybrid. No cult members appeared, and the concert was magical. There was even a laser show featuring a dolphin! The Chromatics were the opening act, and their performance was eerie and perfect.

Name Three Songs that Would Be on the Soundtrack of Your Life:

Let’s Pretend That It’s Summer by The Brian Jonestown Massacre, Tokyo, la Nuit by Lescop, and E.T.A. by Damon and Naomi.