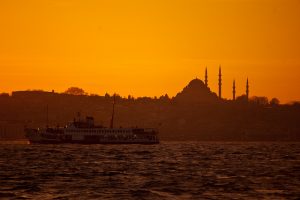 Once there was a white elephant, an Indian boy who was his friend, an architect, several sultans, and a mystery. My introduction to Turkish fiction was the beautifully written The Architect’s Apprentice (2015). The author, Elif Shafak (sometimes spelled “Safak”), has written eight books; the best known is probably The Bastard of Istanbul.

In an interview on the BBC World Book Club — my favorite podcast about books — she spoke very intensely about the importance of diversity and cosmopolitanism. (Listen to it now! Click the icon above her name and close your eyes; it’s a radio broadcast.)

In 2006, Turkish author Orhan Pamuk won the Nobel Prize for Literature. Eisenhower Library has 11 of his books. (His Nobel lecture is beautiful.)

There is a list of popular Turkish fiction books — written in English — from Goodreads.

Here is more from Elif Shafak about Turkish women, diversity, her own upbringing by a single mother, and how her latest novel, Three Daughters of Eve (2016) reflects these themes.

Finally, here is a mystery, or actually several mysteries: a book written in 1943 has suddenly, inexplicably, become very popular. Here is more detail about the plot — and the murder of the author — of Madonna in a Fur Coat.