Red Sorghum: a Novel of China by Mo Yan

Finally, school is over. As you prepare for your dream vacation, why not pick up a book or a film from the library? Our McNaughton Collection, located at the entrance of M Level of MSE Library, features the latest popular readings (fiction and non-fiction) and DVD films, available for check out.

Besides the McNaughton Collection, our regular collection includes numerous award winning titles from all around the world. For example, if you have heard about Mo Yan, winner of Nobel Prize in Literature 2012, but never got the chance to read his works, this might be a good time to do it. 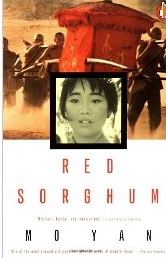 Our library owns 42 titles by Mo Yan, 9 of which are English translations. If you have never read Mo Yan before, I would recommend starting with his first major work, Red Sorghum: a Novel of China. Set in the brutal unrest of northeast China during the 1920s and 30s, the novel tells tales of the Sino-Japanese war intertwined with love and sacrifice of family history, all against the spectacular backdrop of the red sorghum fields of Northeast China.

However, the novel is much more than just another account of the war. As the narrator of the present time looks into the myths and legends of the past, he becomes keenly aware of his own inadequacy, his “nagging sense of our species’ regression” (p.4). He longs for a lost wild vitality, both “most heroic and bastardly,” represented by his hard-drinking, hard-loving grandma and grandpa, and the Northeast Gaomi Township where they lived. Written at a critical moment in recent Chinese history, the middle of 1980s, when China was emerging out of decades of international isolation resulting from the Cold War and the ruins of the Cultural Revolution (1966-1976), Mo Yan’s Red Sorghum can be seen as part of the national soul searching and quest for rejuvenation of a beleaguered nation.

Red Sorghum was adapted into a feature film in 1987 by China’s renowned director, Zhang Yimo. The film is also available at MSE Library.