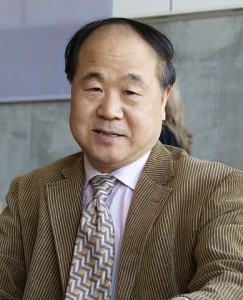 The Nobel Prize in Literature 2012 was awarded to the Chinese author, Mo Yan. Mo Yan is perhaps best known to the Western audience through a successful film adaptation of one of his early works, Red Sorghum, by one of China’s most prominent film directors, Zhang Yimou. Born in 1955 in Gaomi, Shandong Province, an impoverished part of Northeastern China, Mo Yan left school for work at age of 12 and later joined the army in 1976. During his years in the army, Mo Yan started to write, and since the 1980s, has produced at least 17 novels and story collections, an impressive achievement that makes him one of the most prolific and highly respected writers in China today.

By no means bestsellers in China (though this might change after winning the Nobel), Mo Yan’s writings are known for a complexity that defies categorization. For example, his first story collection, Tou ming de hong luo bu (Crystal Carrots, 1986), depicting the lives of rural North China where he grew up,  earned him the label of “root seeking” (xun gen) writer. Mo Yan followed up the success of Crystal Carrots with his debut novel, Red Sorghum: a Novel of China, a historical romance with bold and unrestrained erotic imagery. Red Sorghum catapulted Mo Yan’s writing career onto a completely different creative vista and  led to an outpouring of stories and novels of various themes and styles such as Tian tang suan tai zhi ge (1988; Eng. The Garlic Ballads, 1995), Shi san bu (Thirteen Steps; 1989), Jiu guo (1992; Eng. The Republic of Wine, 2000), and Fen gru fei tun (Big Breasts and Full Hips; 1996). All his stories are characteristically exuberant with earthy vitality and fantastic imagination, yet they are often different and experimental thematically and stylistically. Some of these novels are grotesque and bizarre; others are marked by bleak indignation. In short, Mo Yan’s fiction, with its rich complexity and refreshing innovation, bears witness to and enriches our understanding of the equally complex and forever evolving Chinese society in particular, and the human condition in general.

Our library currently holds six major works by Mo Yan, plus the film, Red Sorghum. A complete collection of Mo Yan’s works in Chinese and other English translations are on order and will be available shortly. For commentaries and criticism of his works, you can check the library databases for literary studies. For literary criticism in Chinese, you can search China Academic Journals Full Text Database, or Duxiu. Enjoy!