Today marked the 23rd anniversary of the “Tiananmen Incident,” a brutal crackdown by the Chinese government on students’ protest and demonstration on Tiananmen Square on June 4th, 1989. China has come a long way since then, from an impoverished Socialist country on the verge of collapse to an economic powerhouse and major world power. In the carnival of commercialism and mass consumption that characterizes China today, it is difficult to imagine, yet all the more important to remember, the kind of courage and heroism exhibited by the students on the streets of Beijing 23 years ago, as captured in the poem by Bei Dao, a Chinese poet in exile, entitled “Proclamation”:

Perhaps the final hour has come 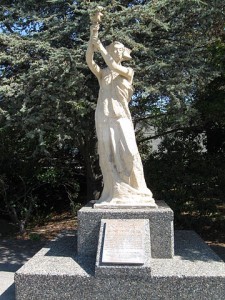 I leave behind no testament
Only a pen, to give to my mother.
In a time without heroes,
I only want to be an individual.

The horizon of peace
Separates the order of the living and dead.
I can only choose the heavens
And I will not kneel on the ground
Allowing the executioner to look tall
The better to obscure the wind of freedom.

From the bullet holes of the stars
There will seep forth a blood-red dawn.

To learn more about the 1989 democratic movement, please consult our catalog for books and archival materials on the topic. A subject search on “Tiananmen Incident, 1989,” for example, would result in a list of 80 titles in the library collections.