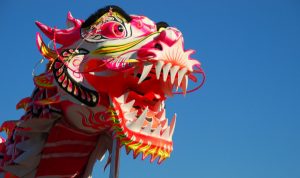 Everyone knows Smaug, the clever, deadly creature who slept on top of a cavernful of treasure that he’d stolen. We also know the murderous Basilisk from the Chamber of Secrets at Hogwart’s.

Yet, many dragons are good and act heroically: His Majesty’s Dragon tells of how Temeraire hatched aboard an English warship, and how he and his aviator helped the British during the Napoleonic Wars. (Temeraire speaks many languages and loves books, but must be read to, because he can’t turn the pages.)

Another story tells of an ancient and learned dragon who is told that he must “leave China and go across the ocean.” This wise entity moves to California, studies computers, saves some lives, and learns a lot about human beings. (Our book about Chinese dragons has beautiful pictures of some of this dragon’s friends.)

Those of us who have ever played Dungeons and Dragons also know of the existence of Wyverns, which the Oxford English Dictionary defines as “a winged dragon with two feet like those of an eagle, and a serpent-like, barbed tail.” (It’s important to know your cryptozoology; you never know what kind of creatures you’ll meet in your life.)

Drogon! Rhaegal! Viserion! DO. NOT. MESS. WITH. THEM, or their “mother,” Daenarys Targeryan. The Game of Thrones wiki has plenty of pictures like these, and your library has Seasons 1 through 5 of the series. (We also have books about the story, as well as music from Season 4 and Season 5 that you can stream.)

What can your library tell you about dragons? A lot:

By the way, those 990 items in our catalog with “dragon” in the title are written in 16 languages. One of the two labelled “Swedish” is The Girl With the Dragon Tattoo. (Watch it right now if you’d like!)

The 22 in Chinese include books, films, and even two musical recordings, which are both CDs located at the Friedheim Library – one is a collection of classical piano pieces by the talented Lang Lang called Dragon Songs, and the other is the soundtrack to the movie Crouching Tiger, Hidden Dragon.

Everyone should read more about dragons!