As an avid browser of our library’s ever-growing database list, you probably have noticed a brand new addition, one that might seem quite odd. Duxiu? What the heck is that? How do you even say the word, if that indeed is a word? 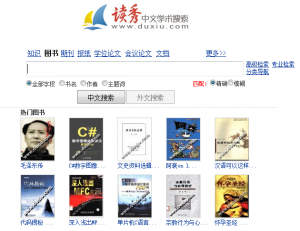 If I tell you that the official name for the database is Super Star (chao xing) and it is sometimes also called Chinamaxx, it would probably only make you laugh. They might as well call it Hunan chow-mein!

Well, if you are a Chinese language researcher, you have every reason to be interested in this database, no matter what it’s called. For this is truly a database like none other. Its enormous content base and powerful search capability can take you to the hidden recesses of knowledge that would normally be out of reach.

To start with, Duxiu is pronounced as “doo-show” and the word consists of two Chinese characters, meaning “reading” and “excellence” – which tells you a lot! What makes this database stand out among other similar products is its massive content base of over 2 million core Chinese scholarly sources. It covers nearly all subjects, and includes books, journals, theses and dissertations, newspapers and more. All with powerful full text search capability. Duxiu‘s digital book collection, in particular, covers nearly all the books published in mainland China both before and after the establishment of the People’s Republic of China in 1949. It is the largest digital library of Chinese books in the world.

So, you may still scoff at the absurd nomenclature of the Chinese database maker (Super Star? Chinamaxx??). However, after you try out the database, you’ll see the truth – as a fortune cookie fortune advised: “Don’t be fooled by the name. It is the content that matters.”