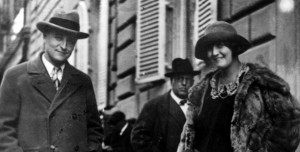 associated with Baltimore, there are many other writers who have lived or worked here. If you look closely as you go around town, you can see some of their haunts and traces.

Among the writers associated with Baltimore at some point in their careers, perhaps the most notable is F. Scott Fitzgerald. Fitzgerald, who was named for his equally famous, distant cousin and Baltimore notable, Francis Scott Key, wrote Tender is the Night and The Crack Up, among other shorter pieces, while in Baltimore. The quintessential Jazz Age couple, Zelda and Scott lived here during the Great Depression, from 1932 to 1936, and Baltimore became the closest thing to home for this restless couple and their young daughter.

The Fitzgeralds moved to Baltimore at the suggestion of Scott’s first editor, H.L. Mencken. Mencken recommended the Phipps Clinic at Johns Hopkins, then the premier facility for the treatment of mental illness, for Zelda, who had suffered yet another nervous breakdown. During their time here, Zelda too finished a book  – Save Me the Waltz. Besides writing, Zelda also was a visual artist, and studied painting briefly at the Maryland Institute College of Art. Several of her watercolors are now at the Evergreen House.

The Fitzgeralds first lived in a country house known as “La Paix,” near Towson. The house has been torn down, but was on the grounds of what is now St. Joseph’s hospital. La Paix was owned by the Turnbull family, another Hopkins connection, as Eleanor Turnbull’s papers are here at the Sheridan Libraries. Turnbull was a scholar and translator of Spanish literature, who encountered the Fitzgeralds as a child. The lease was canceled at La Paix, following a fire accidentally set by Zelda and the Fitzgeralds moved to Bolton Hill. The house at 1307 Park Avenue still stands and bears an historic marker. The other Baltimore residence of this famous family was on the Homewood campus itself. Now Wolman Hall, the residence was then the Cambridge Arms Apartments, and the Fitzgeralds lived here while Zelda was being treated at the Sheppard-Pratt hospital. 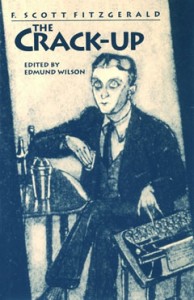 Towards the end of his life, Scott wrote:

“I love Baltimore more than I thought— it is so rich with memories— it is nice to look up the street and see the statue of my great uncle & to know that Poe is buried here and that many ancestors have walked in the old town by the bay. I belong here, where everything is civilized and gay and rotted and polite. And I wouldn’t mind a bit if in a few years Zelda & I could snuggle up together under a stone in some old graveyard here. That is really a happy thought and not melancholy at all.”

He almost got his wish: he and Zelda are buried together in Rockville, MD, along with their daughter, Fitzgerald’s parents, and other Maryland relatives.

Since this series began last year, I’ve discovered a great web site at the University of Baltimore: The Baltimore Literary Heritage Project. It seems to be under construction in areas, but has some interesting information nonetheless. It reminded me of another wonderful resource for Baltimore literary history and lore, and just about any other local information – the Enoch Pratt Free Library’s Maryland Room. This place is a gold mine if you are doing any research on local issues.