The 2015 Baltimore Uprising was a Trans Turning Point 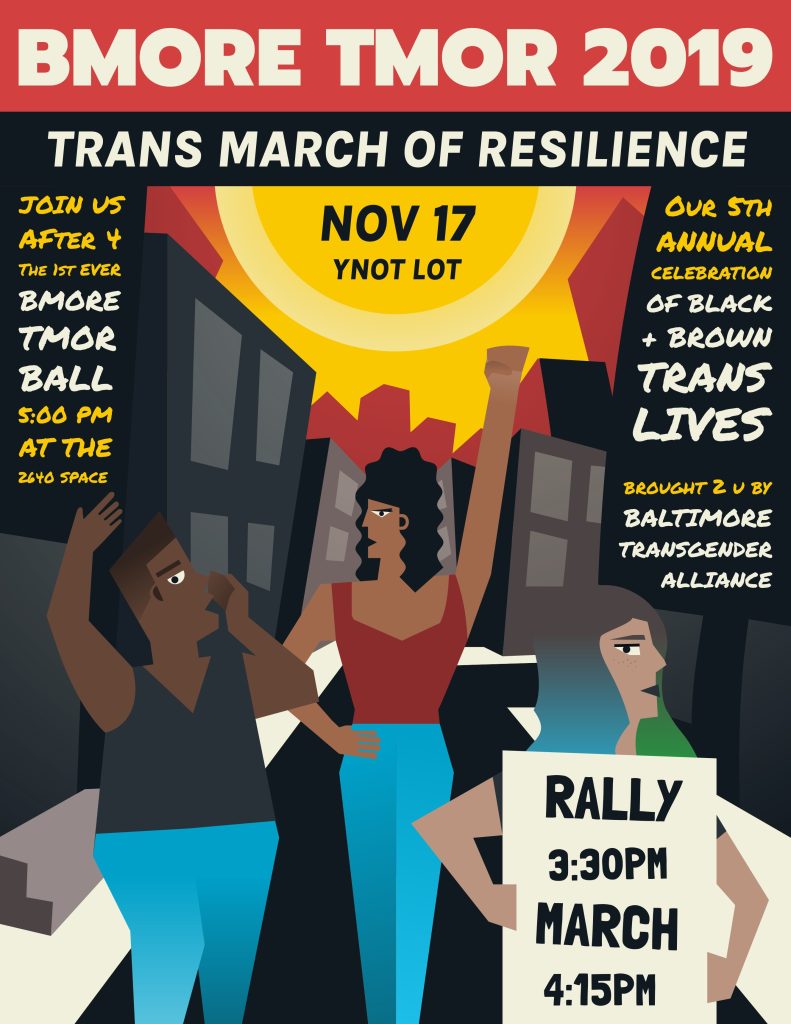 How did the 2015 Baltimore Uprising impact trans activism? This was the question I had as a student in Dr. Joseph Plaster’s “Queer Oral History” course (Spring 2022) and as a researcher working with the Tabb Center the following summer. These are a just a few of the things I learned by conducting oral histories with four Baltimore trans organizers:

From 2015 things had gotten worse…for the black trans community. There were a couple of girls that were murdered. Mia Henderson is the one that sticks out in my mind because I was the victim advocate on that case. I worked with a great attorney, Mr. Fitzpatrick. Oh my god: he’s such a diligent man. So he called me into his office and we talked about trans-related issues. I was giving the spiel about the pronouns and things of that nature. He was very keen on humanizing this woman, very keen....

The defense attorney, whose name I will not mention, was a scumbag.... She had asked the witness, “When was the last time that you saw him alive?” She kept saying “him,” too. Then she would go back and forth, he/she. “Did he look like a boy or a girl?” Mr. Fitzpatrick was like, “Objection!”

Then here comes closing. I’ll never forget this....[The defense attorney’s] basic assertion was the defendant said that he didn’t know she was trans, and that this was the first time he had sex with a transgender woman....The defense attorney says, “As you can see in the video, how was he supposed to know she hadn’t even had sex reassignment surgery? He hadn’t even had sex reassignment surgery yet…” The fact that she even had to bring up her genitals, what the f*ck is that about? It was about transphobia, and that was my concern…What [the defense attorney] did to defame [Mia] was disgusting.

Moses’s account not only illustrates that trans women were victimized and brutalized, but their trans identities were often disrespected in the courtroom or used to justify violence against them. In doing so, public and legal responses normalized anti-trans violence.

Tyler Vile, a Jewish, trans, disabled author and activist, told me about her memories of the Uprising and what it meant for trans Baltimoreans in particular:

I don’t want to talk exclusively in glowing terms about that protest and what it led to because a man was killed by the police, a man who may have had a developmental disability. And I think that when we talk about Freddie Gray, and when we talk about 2015, and we talk about Mya Hall, and all of these other brutal killings of black people who may – some may be disabled, some may be trans or queer, or any other identity.

But I just – I think the grief, the palpable sense of grief in the city is just as important as the defiance of celebration. I remember even just watching the news, you would see someone from their apartment window hold out a bedsheet [and] written on it was, “It’s my birthday today.” So people were sort of finding joy wherever they could.

There was a sense of, at least initially, camaraderie. And then I think in certain activist circles after that, there was … air quotes ‘street cred’ that came with being there. It definitely inspired folks to become street medics. It definitely inspired folks to start getting more serious in activist work, and especially Bryanna Jenkins, who has since become a lawyer, and Monica Stevens founded the Baltimore Transgender Alliance, of which I was a part.

The Baltimore Transgender Alliance (BTA) held marches, vigils, protests, and other events, founded the Trans March of Resilience, and supported victims of anti-trans violence and their families. Ken Jiretsu, a founding member of BTA and now the executive director of Hearts and Ears, reflected on BTA’s significance and his role in the organization as a trans man:

What was going on [during the Uprising] was fuel for us to be able to go out and to march and to let our voices be known and to let folks know that, you know, we’re here. You know, we’ve always been here.... Speaking on behalf as a trans – transgender man – we had our issues going on as well, where us not being seen or folks not paying attention to the things that we went through in regards to violence and in our case suicide, because amongst trans men the suicide rate is extremely high, you know? So I think that was with my part in BTA. That was to make sure that that was put out on the forefront just as much as everything else.

Bryanna Jenkins, who co-founded the Baltimore Transgender Alliance and is now a lawyer for the Transgender Legal Defense and Educational Fund, told me about BTA’s lasting impact:

Even though the Baltimore Trans Alliance is not around, or it’s not active how it used to be, and it makes me sad because I did hope that it would still be around …I am happy to see that, through organizations like Baltimore Safe Haven … that the work that I did,… the work that Monica [Stevens] did, the work that Ken [Jiretsu] did, the work that Ava [Pipitone] did, and how the community came together during that time, paved the way to have places like [Baltimore Safe Haven], because I remember trying to have a house that specifically serves black trans women. Even in 2015, that wasn’t a possibility.

It's been so many years where leaders that preceded me wanted to do something like that, but it was so many obstacles and not even the red tape. But just the politics of keeping black trans people in their place in a city, that would have never happened and the fact that Baltimore Safe Haven, they’ve had two locations, and they have relationships with local city government. And …London de Richelieu, who just got appointed to the Mayor’s Cabinet for LGBTQ affairs. I think that is directly impacted by the groundwork that was laid in 2015, to get folks to take our community seriously here in Baltimore City... I am happy to see the strides to other Black trans folks in the city.

These passages reveal only a fraction of what I learned from my four narrators. I am so thankful that they agreed to speak with and trust me with their stories, and that I got to spend even just a few hours in the same room as such remarkable activists and community members.

I would also like to credit my classmate and friend, Caroline Cerilli, who co-conducted the interviews with Tyler Vile and Bryanna Jenkins in Dr. Plaster’s Queer Oral History course.

The oral histories cited above are available at: