Our Heart Throbs for Barbara Friedlander!

“The night was full of magic. I could swear the computer was smiling at us,” and with those dreamy words, a fetching young couple walks toward their future of love forged through technology. 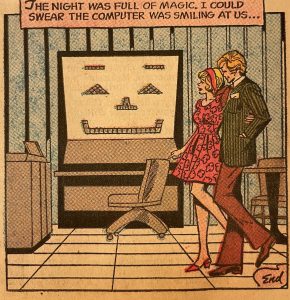 How can you not be completely smitten with a leering pixelated computer programmed to toy with human hearts? The story, called “Love By Computer,” was featured in issue 164 of Girls’ Love Stories.  Such whimsy and retro strangeness fills the pages of romance comic books and I unabashedly adore them! Romance comic books are simply one wild read after another, filled with escapades at Woodstock, conflicted Women’s Libbers, and the occasional nun who falls in love with a night club lovin’ Vietnam War vet. Plus, as “Love By Computer” demonstrates, the stories truly sought to capture the trends and events of the age and how simple love stories could be impacted by them.

Clearly, romance comics were not some fly-by-night gigolo, but rather a popular genre found on the magazine rack from the late 1940s through the mid-1970s. DC Comics in particular were like romance comics central, with numerous titles in their stable, including Falling in Love, Girls’ Love Stories, Girls’ Romances, Heart Throbs, Young Love, and Young Romance. So what does this have to do with Barbara Friedlander, and why should our hearts throb for her?

Well, Barbara Friedlander was like a matchmaker extraordinaire of the comic book world, coming up with stories and filler content that eager readers of the genre would enjoy, all while abiding by the Comic Book Code. She found her niche  at DC Comics through a stroke of luck — an employment agency placed her there due to her administrative skills in the early 1960s.  She started working in the subscription office, but as a lover of soap operas and Hollywood romance spectaculars, she found the romance comic book world to be fascinating. She was soon freelancing for DC Comics and eventually became an associate editor working on all their romance comic books!

Friedlander created and wrote an incredible fashion column for DC Comics called “Mad Mad Modes for Moderns.”  The styles and layout took inspiration from magazines like Vogue, and sought to show its readers just how fun and liberating fashion can be.  The artwork, featuring some of DC’s best artists like Tony Abruzzo and Jay Scott Pike, is fantastic, and the slang can’t be beat. C’mon, ladies on the prowl being called “tiger hunters!”  Plus, I am so sure that the young readers of romance comic books would love some space age  “zap to turn [them] into tomorrow’s chick today!” 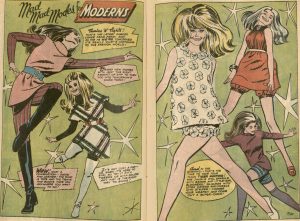 Though in the occasional fashion feature, we must contend with the uber-dated notion that women should dress solely to please men. Perhaps it is the Baltimorean in me, but style your hair into a darn-tootin’ beehive if that makes you happy, tiger-hunting be darned! Wear your Readi-Wip hair with pride! 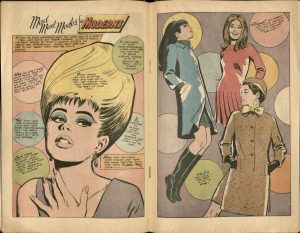 Still not convinced of Friedlander’s influence beyond the confines of tiger-hunting fashionistas?  Well, check out the November 1966 issue of Falling in Love. It contains three-full length ads for comic book work Friedlander created, including the comic book Swing with Scooter (co-created with Joe Orlando), the sensational series “Three Girls: Their Lives & Loves,” published in Heart Throbs,  and “Reach For Happiness,” the Peyton Place-inspired serial that featured in Secret Hearts: 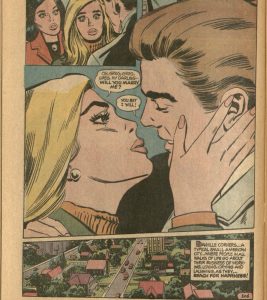 If you love the twists and turns of soap operas, then “Reach for Happiness” is for you. It’s about a young woman who ditches her fiance at the altar in order to scandalously elope with a movie star.  The Hollywood hottie dies in an horrific car crash, leaving the young widow with no choice but to go back to her quaint New England town, coming face-to-face with the man she jilted and having a misguided interlude with a sleazy night club owner. But something revolutionary in the world of romance comic books happens:

In the very last issue of the “Reach for Happiness” series, the heroine gets the guy — the very man she dumped on their wedding day! She proposes and he says yes! So clearly,  you should say “yes” to the allure of the romance comic book.  You can learn about Barbara Friedlander’s legacy by researching our ever-growing collection of romance comic books!  Browse our online album to view cover art from the over-200 issues held in Special Collections, and be on the alert for a special romance comic book mini-exhibit heading to the Brody Learning Commons very soon!