The temperance movement in the United States started in the 18th century, advocating for the abstention from alcohol and drugs. Organizations including the Anti Saloon League and Womens Christian Temperance Union campaigned successfully for the 18th amendment to the constitution, which prohibited the possession and manufacture of alcohol from 1920 to 1933. Prohibition songs can be found throughout the Levy Collection, reflecting the conflicting attitudes and arguments towards these movements. 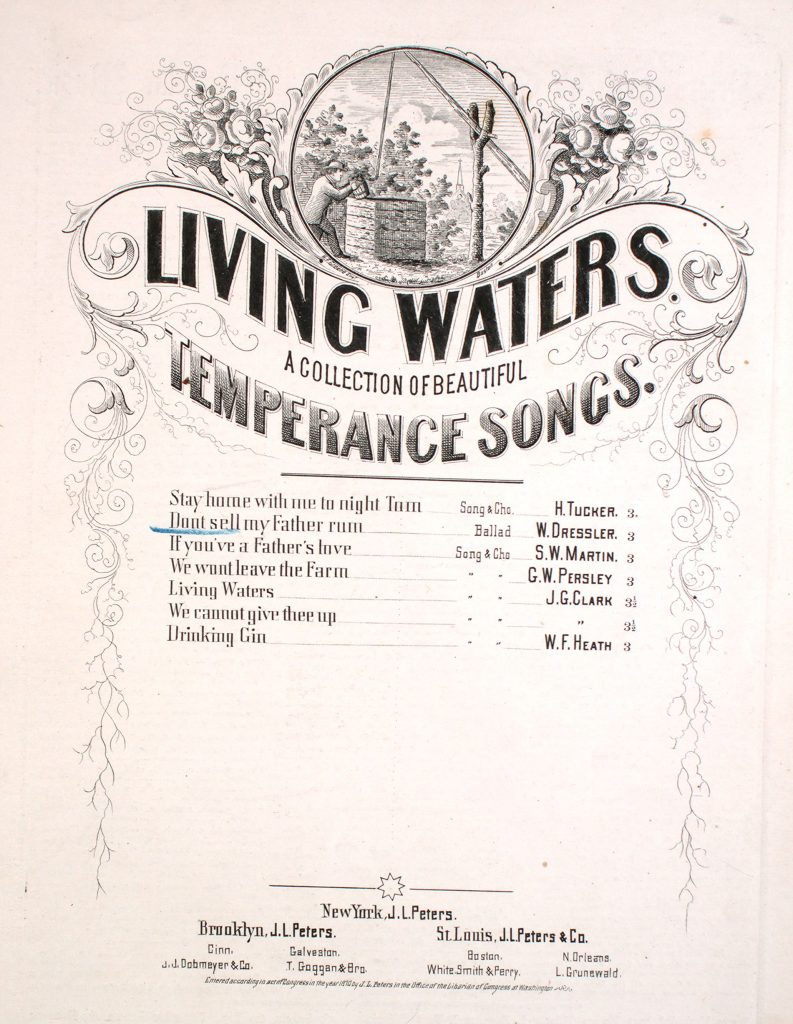 Published in 1870 by Nellie H. Bradley, Don’t Sell My Father Rum is composed from the perspective of a child. Bradley wrote numerous temperance songs geared toward children, including “An hour with Mother Goose and her Temperance Family,” and “A Temperance Picnic with the Old Woman Who Lived in the Shoe.” She was also the author of religious essays, aiming to “warn the young against the seductive snares and dangerous pitfalls laid for the souls by the twin demons, Alcohol and Tobacco.” She also claimed, “A majority of the criminals in our State prisons enter them under the age of twenty-one years of age… placed there, by their own confession, through the influence of strong drink, tobacco, and vicious literature.” 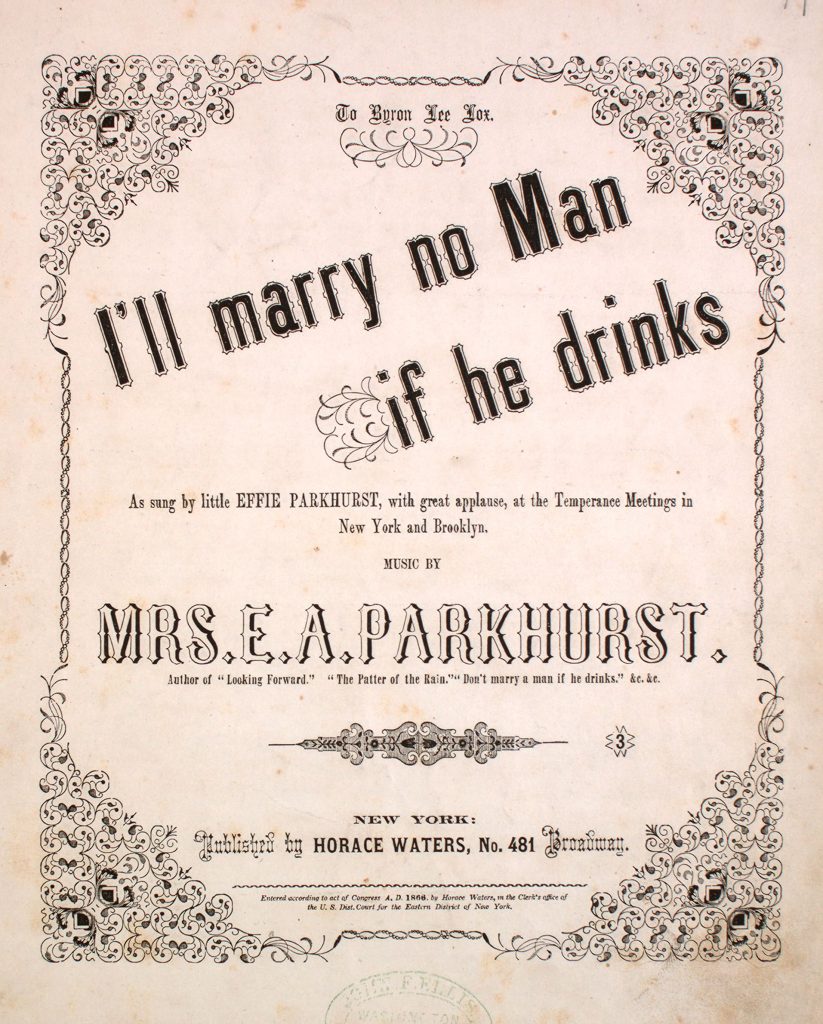 I’ll Marry No Man If He Drinks was published in 1866 by Susan McFarland Parkhurst. Rather than being from the perspective of a child, this song is from the perspective of a wife. However, the cover notes that the song was sung by “little Effie Parkhurst” at temperance meetings. These may have been organized by the Womens Christian Temperance Union, an organization that still exists today. 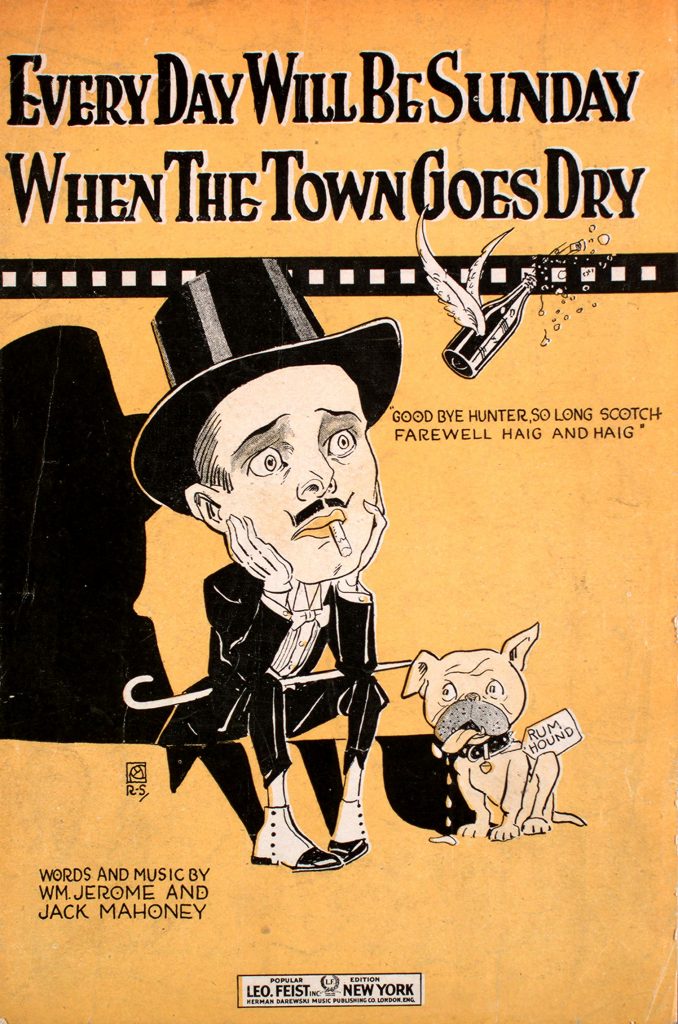 This anti-prohibition song by WM Jerome and Jack Mahoney has a vibrant cover. Seated next to a rum hound (heavy drinker) is a well-dressed gentleman (a moderate drinker), sadly watching his one beer flying away. The song was published in New York, a city infamous for its lack of enforcement of prohibition (by 1930, the police commissioner of the city estimated that there were at least 30,000 speakeasies, or illegal bars).

The first page of music notes the song was made available for talking machines, player pianos, bands, orchestras, and male quartets– a clear indication that the song was intended to be distributed as widely as possible. Numerous references to period drinks and brands can be found in the song, including Bromo Seltzer headache medicine.

A recording of the song can be found here. 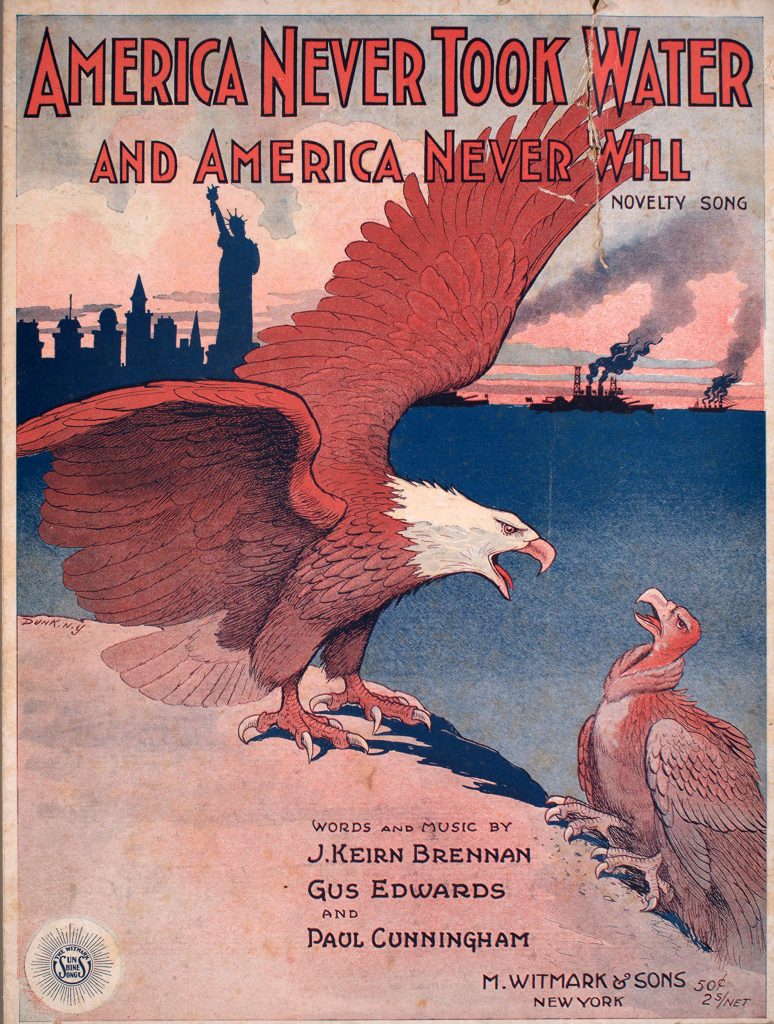 Another pro-alcohol song, “America Never Took Water” was also published in New York. The song has three composers, all listed equally. One of them, Gus Edwards, started his career as a song plugger, a profession especially popular for youth that involved promoting Tin Pan Alley songs. This might include pitching songs to vaudeville stars backstage, or singing them from the audience (Irving Berlin was another musician who started as a song plugger). A piano version of the song can be found here.