Meet our Freshman Fellows: Ankita Sen on A Silent Statue that Speaks Volumes

Enjoy this post by Ankita Sen, one of our Special Collections Freshman Fellows for the 2020-2021 academic year!

My name is Ankita Sen and I am a first year student from Princeton, New Jersey. I am double majoring in Classics and International Studies, with a minor in Museums and Society. I have studied Latin for seven years and I am ecstatic for the opportunity to do research in the Johns Hopkins Special Collections Department. For my Freshman Fellows work this year I am translating Renaissance era Latin texts with my mentor, Paul Espinosa. 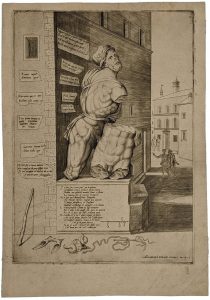 For my first project, we decided to look at an engraving from 1550 of Pasquino, one of the most famous ‘talking statues’ in Rome. These ‘talking statues’ were often badly disfigured and in ruins when first excavated and eventually came to stand in different locales throughout Rome. This group of two torsos, today thought to be a copy of a 3rd century Hellenistic original, came to be called Pasquino, eponymous with a schoolteacher by whose house the statue laid until it was erected by Cardinal Carafa in the Piazza di Parione in 1501. So famous did the association between the marble ruin and its location become, that today it stands in what is known as the Piazza di Pasquino. During the 16th century, these statues turned into bastions of free speech as Renaissance Romans would post short notes in Latin and Italian directly on and around the statue (as seen in the engraving). These ‘cartelli’ (‘little notes’) were satirical in nature, criticizing church and government. Short, scathing remarks like these came to be known as pasquinades; and Pasquino, though silent as stone, became the conveyor of the anonymous common voice. 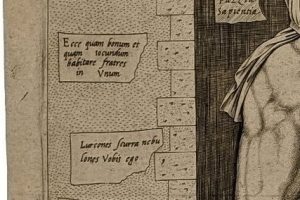 Let’s take a closer look at the engraving above, recently acquired by the Johns Hopkins Sheridan Libraries. The artist engraved the image directly onto a copper plate, inked it, and then pressed it through a roller in order to pull the ink up out of those recessed lines: a process known as intaglio printing. The result gives the fine details, cross-hatching, and depth of perspective we can observe in the print. Here is an instructive video demonstrating the entire process. Even the letters seen in the print had to be inscribed with a very steady hand, and backwards.

The Latin of the lower pasquinade reads: Lurcones scurra nebulones vobis ego. “With respect to you all, gluttons, and good-for-nothings every one, I am but a jester.”  That Latin word scurra,  ‘jester, buffoon,’ continues its work in our English word, scurrilous, or ‘humorously insulting.’

Many of the notes posted on Pasquino had to be quickly copied because they were soon taken down by the authorities, both secular and spiritual. One such gathering of notes ended up in a volume titled Pasquillorum tomi duo, a two volume collection of anti-papal epigrams, published in 1540, which is owned by the George Peabody Library of Johns Hopkins. Possessing these volumes was a crime in Rome, so its production was moved to Basel and the book was hidden under the title “Eleutheropolis” or “freedom city” in Greek. In the sixth entry, the following two lines comment on the nature of Pasquino, as if speaking from its perspective:

“There is no man better than me in Rome. I seek nothing from anyone.
I am not talkative. I sit here and am silent.”

This epigram highlights the irony of Pasquino ‘silence’: although the statue cannot itself speak, it nonetheless provides a site for the satirist to speak.

In my next post, I will translate additional Latin pasquinades, but now that you have been introduced to Pasquino, you might also enjoy this short blog from JStor, an important online database to scholarly articles which we have access to as JHU students. There one can find additional links to informative articles about this tradition of satire.