Meet Our Freshman Fellows: Aarushi Krishnan on the Anti-Suffrage Movement

Enjoy this post by Aarushi Krishnan, one of our Special Collections Freshman Fellows for the 2019-2020 academic year!

My name is Aarushi Krishnan, and I’ve had the privileged to be named a freshman fellow. I hail from southern India, and am pursuing a double major in Molecular and Cellular Biology and the Writing Seminars. Over the last few months I’ve been researching the women opposed to the 19th amendment, and my journey has been momentous, to say the least.

When I first got my acceptance letter, I wasn’t fully sure what I was signing up for- would I be spending my first ever year at Hopkins bent double over musty books, locked away from the world? Not quite. I’ve been lucky enough to have been granted access to a vast collection of ephemera, which consisted of everything from playing cards to postcards to pushpins. 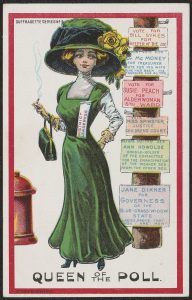 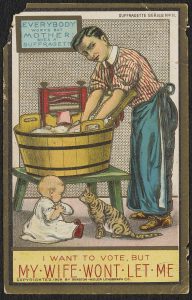 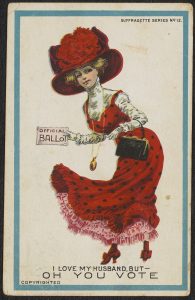 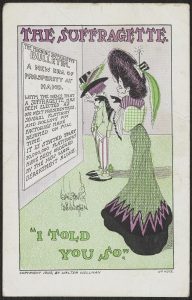 In addition to learning about the rich history behind the amendment, my curiosity was also piqued by a number of mysteries that arose from my studies. For example, when reading through an issue of The Woman-Patriot, an infamous anti-suffrage periodical, I came across a quote from Phoebe Couzins that strongly critiqued the suffrage movement. This surprised me; Couzins, one of the first female lawyers in the United States, was a trailblazer in her field and a feminist to the bone. After doing a deep dive, I was surprised to find out that though she always believed in equality, towards the end of her life she was actually against suffrage. The path to suffrage was a long one, and the trials and tribulations created seem to have had endless consequences.

One of my main learnings coming out from my first semester of research, is that history is never clear-cut. It was interesting to learn that prominent voices of opposition to the movement were people of color- a group who were understandably concerned about their rights being infringed upon by an opposing power. This led me to finalize my area of research- women who were opposed to the amendment, but for non-traditional reasons. I’ve researched staunch feminists who were against the amendment as they felt that suffrage simply wasn’t the right way to go, women of different ethnic groups who felt that what could be a win for them as women would be a loss for them as a race, and learned, educated women who didn’t see the power behind what the amendment stood for. I learnt that we live in a highly nuanced world, and what may seem as an obvious boon to some might be abhorred by others.

“ All that sober science in the form of history and physiology would seem to entitle us to hope from the future of woman is that she will develop pari passu  with man; and that education will teach her not to retard him overmuch by her lagging in the rear”

-Sir Almroth Edward Wright, eminent British bacteriologist and steadfast member of the anti-suffrage movement, from his book ‘The Unexpurgated Case Against Women Suffrage’ (1913)

“Progress is writ large on all woman’s banners and bannerets; but one can actually see her going back”

-Friedrich Nietzsche (quoted on p. 93 of Wright’s “The Unexpurgated Case”)

I learnt that anti-suffragist music exists, simply to be the bane of my existence- 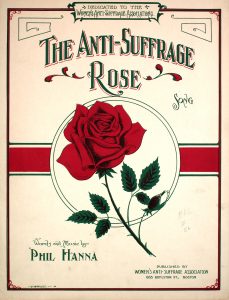 But perhaps most importantly, I’ve learnt that there’s always hope, as long as you know where to look for it-

“The happiest people I have known have been those who gave themselves no concern about their own souls, but did their uttermost to mitigate the miseries of others.”

Emmeline Panhkurst, “My Own Story“

I’m incredibly excited for my second semester of research. A world of interest awaits.