Hard-boiled and Noir Fiction and Film 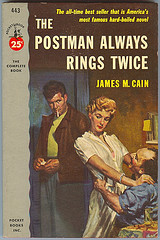 Travelling through fetid alleyways in the pouring rain, through thronging cities like beating hearts, and darkened rooms echoing gunshots and last breaths, the fiction and film of the hard-boiled and noir genres bring readers and viewers along for vivid, engrossing, sensual experiences that earlier mysteries neglected in favor of purely intellectual exercises.

Often used interchangeably, the terms noir and hard-boiled actually refer to different kinds of works. While hard-boiled stories tend to deal with detectives confronting violence and 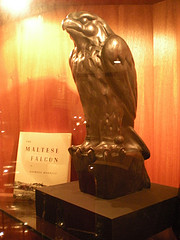 organized crime, detectives who all the while comment on both the events transpiring as well as their own experiencing of those events (think Dashiell Hammet’s Maltese Falcon or Raymond Chandler’s The Big Sleep), noir tends to deal with more atmospheric adventures wherein the protagonist is more often a victim or a criminal (think James M. Cain’s Double Indemnity, or the works of David Goodis, upon whose stories the films The Fugitive and Tirez Sur le Pianiste (Shoot the Piano Player) are based). Although noir finds its origins variously in French and American sources, the heart of the hard-boiled story is purely American.

The heyday of American examples of the genres was undoubtedly the 30s, 40s and 50s; nevertheless, modern adaptations both in fiction and film abound. The films of the Coen brothers often draw heavily on the tradition of both noir and hard-boiled stories from America’s past. Perhaps one of the most interesting adaptations of the genres, however, comes not from the US, but rather from the north of Europe in the form of Scandinavian noir. 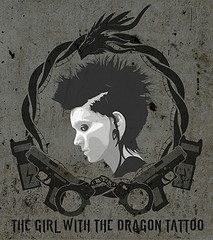 Scandinavian noir owes much to the traditions discussed above. However, as prime examples of the genre show, there are subtle differences; the writing is often sparse, sharp, simple and realistic and the plots often carry heavy moralistic undertones. Progenitors of the genre include Maj Sjöwall and Per Wahlöö, whose Martin Beck series of novels depict a tumultuous Sweden of the 1960s, bent on revolution and social upheaval. Perhaps more well known examples include Henning Mankell‘s Wallender series, and Stieg Larsson‘s internationally best-selling Millenium series, the first of which, The Girl with the Dragon Tattoo has been adapted for the big screen twice in the course of just two years. Clearly the fascination with unsolved murder and illicit dealings is alive, well, and spreading around the globe!

One thought on “Hard-boiled and Noir Fiction and Film”