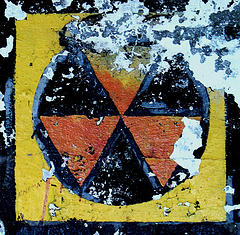 In light of Summer Reading Season as well as the upcoming adaptation* of another story about what might happen after a nuclear conflict, let’s look at some of the novels and fictional movies that are based on effects of nuclear war, atomic bombs, or radiation.

Nuclear war and the effects of radiation have been and continue to be recurring themes in literature and in movies, for the most part beginning after the bombing of Hiroshima and Nagasaki at the end of World War II. For example, look at these overviews of how society’s fears were translated into popular culture, in the forms of movies and books. (You can also review the history in our online The Columbia Guide to Hiroshima and the Bomb, which describes the events and reviews the thinking behind the decision to use the bombs.)

Perhaps the best-known novel about what might happen after such a war is On the Beach, written in 1957 by aeronautical engineer Nevil Shute. Two years after the book appeared, a now-classic movie version, starring Gregory Peck and Ava Gardner, hit the theaters. (The plot: radiation from a nuclear blast has killed almost all life on earth. There are survivors in Australia, who react to their approaching deaths in different ways [understatement]. But might there still be survivors elsewhere?)

Here are some of my favorite movies of this genre:

Not surprisingly, many books have been written about the pervasiveness of this theme in American popular culture. Find them by entering the phrase “nuclear warfare in motion pictures” as a SUBJECT. The fascinating results include Celluloid Mushroom Clouds, and Film and the Nuclear Age: Representing Cultural Anxiety. (Also don’t miss the very informative Paranoia, the Bomb, and 1950s Science Fiction Films, which isn’t included in the list.)

Let’s use the library catalog (the advanced search, of course) to find more movies and books about this theme:

Finally, I’m sorry to report that Richard Matheson, who wrote the stunning book The Shrinking Man (1956), died on June 23. The book was made into the unforgettable film The Incredible Shrinking Man (1957). As a matter of fact, the American Film Institute Catalog reports that modern critics often refer to it as “one of the best science-fiction films ever made.” Don’t miss his other two best-known movies, Duel and I Am Legend (only circulates to Peabody affiliates; otherwise, view it at the Friedheim Library). And enter the phrase “twilight zone” as a TITLE to locate the DVD with all of the original episodes, many of which Matheson wrote (including Nightmare at 20,000 Feet with William Shatner).

*Next summer, TNT will show something based on The Last Ship, a book written in 1988 by naval officer and journalist William Brinkley. What happens when the crew of a navy ship may be the only people alive after nuclear weapons are fired? The story is riveting and amazingly realistic. Unfortunately, as you’ll see in the trailer, the story seems to be about viruses instead of nuclear strikes. (Bad idea, people! The book is great and certainly doesn’t need viruses!) Read the book.

2 thoughts on “Nuclear War and Fiction”