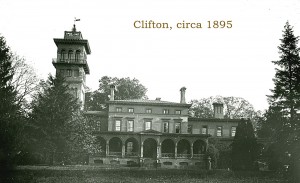 On May 13, 2015, it was my privilege to speak at the annual birthday celebration held for our founder at Clifton, his country estate. Clifton was given to the University in Johns Hopkins’ will, but the trustees sold it to the city in 1895. Since then, a public golf course has been built around the house, and the mansion served as the clubhouse for several years until a new clubhouse was built. A non-profit corporation named Civic Works is slowly renovating and restoring the house to its 19th century appearance, mostly through private donations, assisted by Friends of Clifton Mansion. The house is located in the vicinity of Harford Road and Erdman Avenue.

Johns Hopkins bought the house in the 1840s and added an observation tower, from which he could see ships bearing his flag entering the harbor to unload goods. He also entertained friends and family at Clifton, sparing no expense for their comfort and enjoyment. In the 19th century, Clifton was well outside the city limits and it served as his “summer home.” He enjoyed walking the grounds with his gardener, inspecting the horticultural progress. Johns assumed that the University eventually would locate at Clifton, but because he did not want the trustees to spend the principal of the endowment, they chose to begin in the city, with the intention of moving to Clifton as finances allowed. Due to financial problems in the late 19th century, which led to our first fundraising drive, the trustees sold the house and property to the city.

In my talk, I addressed the question of our founder’s intentions for the University. He wrote two paragraphs in his will regarding the University, and nothing else, leaving everything in the hands of his trustees. Therefore, we know very little about what his ideas were. Because his own formal education ended at the age of twelve, he may not have presumed to know what a university should be or how it should operate. His only requirement was that the University offer scholarships to qualified students from Maryland, Virginia and North Carolina, the three states where he did most of his business. The trustees, none of whom were educators, hired Daniel Coit Gilman as our founding president and left all but the most important decisions in his hands. So, while we have Gilman to thank for what the Johns Hopkins University became, this should not diminish our gratitude for the magnificent gift from our founder.