On May 19, 1795, Johns Hopkins was born in Anne Arundel County, the second of eleven children of Samuel and Hannah (Janney) Hopkins. His parents, members of the Society of Friends (Quakers), raised tobacco and owned slaves, who tended the cash crop. In 1807, as part of the movement to abolish the slave trade, the Society of Friends stipulated that human slavery was incompatible with the Christian faith, and all members were strongly urged to free their slaves. Johns’ family did so, keeping as paid laborers those who wished to stay, and supporting those too old to go out on their own.

With the departure of most of their labor force, Johns and his older siblings were forced to leave school to tend the fields. Thus, Johns’ formal schooling ended at the age of twelve. Hannah did her best to further her children’s education, however, and the local schoolmaster was a frequent dinner guest. Some have speculated that this lack of formal schooling caused him to decide later in life to found a university – so that others could have what he had been denied. 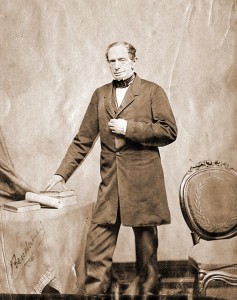 Lack of schooling certainly did not impair his ability to prosper. When he moved to Baltimore at the age of seventeen to work for his uncle, his mother told him, “Thee has business ability.” First in the dry goods trade, then in railroads, followed by a career as a private financier, he achieved wealth. His sense of frugality, coupled with his excellent judgment of character and a willingness to take risks, served him well throughout his life and resulted in a bequest of $7 million upon his death to found a university and a hospital. To put that figure in perspective, $7 million in 1873 (the year he died) would be approximately $135 million today.

So, happy birthday, Johns – and thank you!