A History of Johns Hopkins Yearbooks

In 1889, the undergraduates of The Johns Hopkins University published their first yearbook. Entitled The Debutante, the little book with a black-and-blue cover consists of 110 pages, and only a handful of photographs. Most of the illustrations are line drawings, some of them finely detailed. One may assume the title was chosen because this was the debut of the yearbook (otherwise, the title, for an all-male institution, seems rather odd). The book begins with an Editorial, which opens: “The class of ’89 is about to leave the college halls and go forth into the world. Each and every member takes in his hand a copy of The Debutante and his diploma (we name them in order of importance and hope that neither will be omitted) and feels fully prepared to join the graduates coming at this time from other colleges to dazzle the world in its ignorance by the light of their own superior wisdom.” Lest one think the 1889 editors were too full of themselves, the Editorial continues, “A few months will doubtless be sufficient to convince most of us that there really are a few things to be learned and a few persons towards whom we must not be too condescending.” 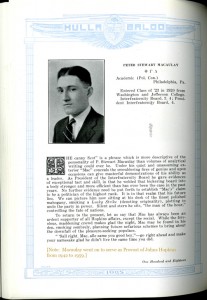 With few photographs in the early years, the emphasis was on prose, with lengthy descriptions of class activities, athletic contests, and social events. As proof that nothing changes, the inaugural yearbook also includes a poem bemoaning the grave injustice of holding classes at 9:00 a.m. In 1890, the yearbook appeared with the title Hopkins Medley, then, in 1891, the title became The Hopkinsian. In 1892, the name Hullabaloo first appeared, but in 1893 it reverted back to The Hopkinsian, before changing permanently to the Hullabaloo in 1894. The word “Hullabaloo” comes from a football cheer: “Hullabaloo – Canuck – Canuck! Hullabaloo – Canuck – Canuck! Hurrah! Hurrah! J. H. U.” I guess you had to be there.

In 1898, the first photos of individual seniors appeared and, by the 1920s, each senior had his own page with a photograph, a list of academic and extracurricular activities, and several paragraphs written by the editors commenting (humorously) on that individual. From the 1920s through the 1930s, the yearbooks were almost works of art, with intricate drawings and adornments on each page.

During World War II, as with other aspects of society, the Hullabaloo became more lean and serious and tried to promote the war effort. When Hopkins went to a twelve-month academic schedule, two editions were published in 1943 – a Spring and a Fall edition. In 1944, the yearbook was just a small photo book covering both the “July Seniors” and the “October Seniors.” Also included was a list of alumni killed or missing in action at that time. No yearbooks were published in 1945 or 1946.

Through the 1960s and early 1970s, the Hullabaloo reflected anxiety and opposition to the war in Southeast Asia, and the focus was definitely on photographs, to the near exclusion of prose. Candid photos appeared without captions, even (in one year) for the senior photos. In 1973, the yearbook disappeared altogether, at least until 1991, when that edition finally appeared with a full-page explanation for the delay. Loss of university funding, inability to raise money, staff forced to move five times in a year, and general lack of interest on the part of the administration were all blamed.

Through all seasons and all tribulations, the Hullabaloo has continued to appear in print. In 1997, the first color photography was published. While many universities have changed to an online yearbook, the Hullabaloo still appears in ink-and-paper, although greatly reduced in size. A complete set of our yearbooks can be found in Special Collections, located on A-Level of the MSE Library.

Please note, if you wish to visit, that Special Collections will be closing on June 15 as we prepare to move to the Brody Learning Commons. We anticipate re-opening by mid-August, and the yearbooks will again occupy a place in our new facility.