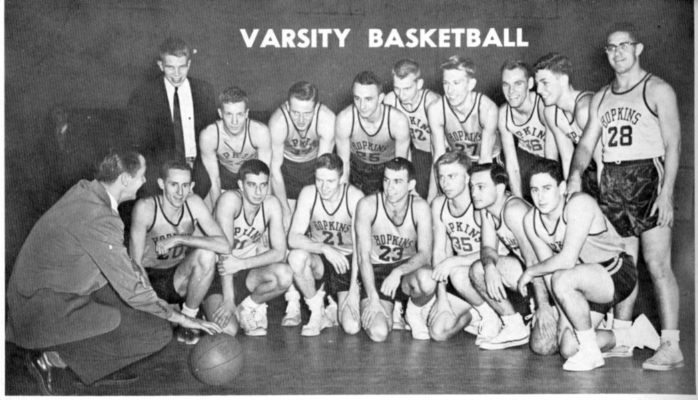 It’s that time of year again, when the nation’s eyes turn to college basketball and the “big dance.” Every college or university likes to tout its “scholar-athletes,” and Johns Hopkins University is no exception.  Bright students who find time to play sports in addition to their academic work contribute to the vitality of any campus. While Hopkins has more than its share of scholar-athletes, few have accomplished more than a basketball star from the 1950s: “Moan” Margolis, a member of the class of 1953.

Now better known as Dr. Simeon Margolis (he earned his MD and PhD from the School of Medicine) and for his status as a long-time member of the Hopkins medical school faculty, Margolis had the hottest night of his basketball career on Friday, February 20, 1953. On that night, he scored 44 points against Randolph-Macon College, in a Mason-Dixon Conference game at the old gymnasium on the Homewood Campus.

A Baltimore Sun reporter wrote:  “The 5-foot 10-inch senior set a new Hopkins scoring record, a new gymnasium record and tied the Mason-Dixon Conference mark set by Jim Lacy against Western Maryland in 1948. Margolis hit from outside with a one-hander that seldom missed and from the free-throw line he dropped 14 out of 15.”

The newspaper in Johnstown, Pennsylvania (Margolis’ hometown) pulled out all the stops with descriptions of a “dazzling shooting performance” and shots that “scorched the cords” and his “driving layups that swelled his total.”

Margolis was team captain in his junior and senior year (1952 and 1953).  He led the team in scoring  in 1953 with 314 points, and the win against Randolph-Macon took the Blue Jays to the Mason-Dixon tournament where they lost to defending champion Roanoke College, 76–73 in overtime.  Margolis had 26 points in that game and was a named a second team all-conference player for the third year in a row. Keep in mind that he accomplished all of this in an era long before the 3-point shot was introduced.

As outstanding as he was on the Hopkins basketball team, Margolis was driven to other pursuits: “The NBA was not in my future,” he says.  “I pursued my love of science and medicine and I’ve been a research scientist, teacher,  and physician at Hopkins for over 40 years.”  During that time he was Director of the Division of Endocrinology and Metabolism and Associate Dean of Curriculum Development for the School of Medicine. He has special interests in diabetes and coronary disease. For his PhD research, he investigated how the blood transports cholesterol.

Dr. Margolis believes in educating the public about health issues, and he has done so through a column in the Baltimore Sun and as medical editor for a series of newsletters and reference books for people over 50 years of age.

Still a fan of Blue Jays basketball, Dr. Margolis can often be seen in the stands at Homewood’s Goldfarb Gymnasium cheering on his alma mater. One wonders if any of the players know that the Hopkins scholar-athlete and single-game scoring champ, medical scholar, and physician is watching.  If they did maybe they would ask him to give the ball a rub for good luck.  No doubt, he would do that.

But he might not root for one of them to break his incredible record from so many years ago.

One thought on “Hopkins Hoops and History”