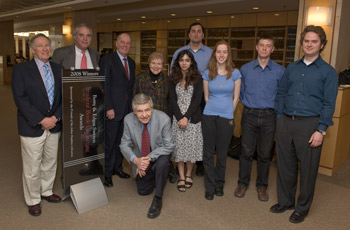 Open to all undergraduate or graduate students enrolled in a degree program at Johns Hopkins, the 2008 Betty and Edgar Sweren Student Book Collecting Contest attracted 26 entries from six academic divisions. Participants wrote essays describing how and why the collection was assembled and submitted a bibliography of up to 50 titles and a wish list of up to 10 titles to reflect their future goals and areas of interest in developing. Cash prizes of $1,000 and $500 were awarded to first- and second-place winners, and $250 to honorable mention. Selections from the winners’ collections are on display on the main level of the university’s Milton S. Eisenhower Library beginning April 18. More details about the winners are available after the break.

Colin Azariah-Kribbs won first prize in the undergraduate category for her collection of otherworldly and supernatural fiction, A Library of Weird Fiction. A freshman from Athens, Georgia, Azariah-Kribbs is pursuing a bachelor’s degree in English in the Krieger School of Arts and Sciences. Matthew Gibson of Washington, D.C., a first-year graduate student in the Krieger School’s master’s in applied economics program, won first place in the graduate student category for his collection of Russian literature, Learning to Read Russia. Sophomore Alexander Baish, from Rockville, Maryland, won second place in the undergraduate category for his entry, For the Love of Birds, a collection devoted to finding, identifying, studying, and protecting birds and their habitat. Baish is an environmental engineering major in the Whiting School of Engineering. Jeremy Pope, a PhD candidate in Egyptology in the Krieger School’s Near Eastern Studies program, won second place in the graduate division for his collection of works on Africa’s ancient past, titled, Africa in Antiquity.

Senior Sarah Montague of Brookline, Massachusetts won honorable mention in the undergraduate division for Fairy Tales and Folklore, a collection of tales from many

cultures around the world. Montague is completing her bachelor’s degree in biology at the Krieger School. Dmitry Shapovalov, a PhD candidate in astrophysics in the Krieger School, won honorable mention in the graduate division for his collection on climbing and exploring the great mountain ranges of the world, titled Mountaineering in the Greater Ranges. Shapovalov was born in Tajikistan and grew up in Kiev, Ukraine. In addition to the cash awards, winners receive a one-year honorary membership in the Friends of the Johns Hopkins Libraries. Top-prize winners of the Hopkins contest are also eligible to enter the 2008 Collegiate Book Collecting Championship, sponsored by the publisher and editor of Fine Books & Collections Magazine. The three top winners of this contest receive cash prizes and a donation in their name is made to their library. The Eisenhower Library display runs through May 23, and may be viewed Monday through Thursday from 8 a.m. to midnight, Friday and Saturday from 8 a.m. to 10 p.m., and on Sunday from 10 a.m. to midnight.