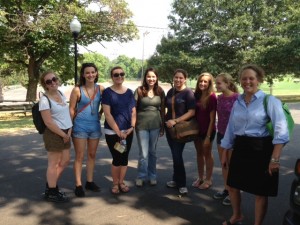 Homewood House is more than a museum full of beautiful objects. It serves as a laboratory for a Museums & Society class that Catherine Rogers Arthur teaches each fall.  Throughout the class, the students work to curate an exhibition that presents their research and discoveries on a topic that changes every year. This year, Ms. Arthur’s class is titled “Curating Homewood: A Tale of Two Houses – Homewood, Clifton & Historic Preservation.” The students’ lab space includes these two houses that were used as summer retreats beginning in the early 1800s. Clifton was built by Henry Thompson, a wealthy land owner and War of 1812 hero. The original home was a two-story one-room-deep Federal style house. In 1837, Johns Hopkins bought the house and its 166 acres. By 1852, he had added on to the house and created an Italianate style mansion. Over time he added acreage and the property grew to over 500 acres.  When Hopkins finished the remodeling of his summer residence, the Baltimore Sun published on 2/5/1852:

Improvements at “Clifton Park,” Country Residence of Johns Hopkins, Esq.–This magnificent county residence, situated on the Harford road, a short drive from the city, has lately been enlarged by an entire re-modelling of the old mansion, whilst the grounds have been greatly extended by the addition of several hundred acres, constituting it one of the most elegant, extensive and beautiful villas in this country.

When Johns Hopkins died in 1873, Clifton was left to Johns Hopkins University who then later sold it to the City of Baltimore in 1895. The city turned the property into Clifton Park. Over time the summer home experienced neglect and now needs extensive work. 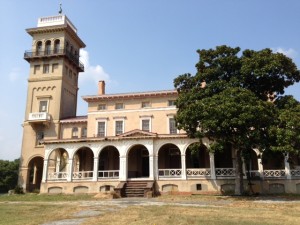 In comparing the two houses, Homewood serves as an example of one restored, while an extensive preservation project at Clifton has just begun. The work at Clifton allows the class to view close at hand the techniques of such a large preservation project. This is the time to discover what lies behind the walls, under the floor boards, and above the ceilings and learn how experts are able to repair an historic building that has suffered serious damage over the years.

In September, Ms. Arthur and her students went on a field trip to Clifton (still a city park) not too far from the Homewood Campus. After a short drive, the class was out of the van and ready to head toward the house.

Sue Brooks, a Civic Works employee (and Evergreen docent), greeted the class and gave a brief overview of the property. She led the group to the porch and introduced the students to Nelson Bolton,

a descendant of Henry Thompson. He began to talk about the chronology of the house, beginning with the porch and what it reveals.

They then examined exposed walls and found that they were made of stone in the original part of the house and brick in the addition. Ceilings also exhibited exploratory holes. The students had to be careful in some rooms as the floors were being removed to examine the condition of the joists.

Clifton’s kitchen was not on the first floor as it was at Homewood; at Clifton it was in the basement (a detail more frequently seen in townhouses). So down the stairs they went to see what was cooking in the kitchen.

Then with a burst of reserve energy, the group climbed 70 steps to the top of the tower and was rewarded with cool breezes and a panoramic view of Baltimore all the way to the harbor.

When the tour ended, the class headed back to campus ready to study the restoration work that has been and will be done on both houses. I look forward to their telling of this tale in their exhibition which will open as part of the museum’s annual Homewood by Candlelight evening from 5-7 p.m. on Monday, December 9th, with a special preview featuring gallery talks by the students from 2-4 p.m. on Wednesday, December 4th.