Who Was Milton S. Eisenhower? 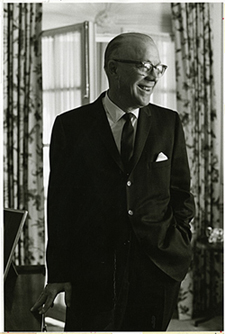 Milton Stover Eisenhower, born September 15, 1899, was the fifth son of David and Ida Eisenhower. His older brother, Dwight David (the middle child of five brothers), gained fame as Supreme Commander of Allied Forces in Europe in World War II, and was elected the 34th President of the United States in 1952.

Milton grew up in Abilene, Kansas, and earned a bachelor’s degree from Kansas State University. He worked as an advisor in the Department of Agriculture and served as deputy director of the Office of War Information during World War II. From 1943 to 1950, he was president of Kansas State University. In 1950, he became president of Pennsylvania State University, where he served until 1956. In both positions, he was known as a friend to students, who would socialize with him and seek his advice for difficult problems. For Milton’s connection to Hopkins and the library, keep reading after the jump.

Upon the retirement of Johns Hopkins President Lowell J. Reed, Milton Eisenhower was asked by the trustees to assume the presidency. Beyond the prestige of the Hopkins name, there were two other factors that influenced his decision to leave Penn State. His wife, Helen, had died in 1954, and he was said to be despondent over her death and wished to make a new start. Also, his brother Dwight was nearing the end of his first term as US President, and had suffered a heart attack in 1955. While running for re-election, he wanted his younger brother to be closer to Washington to render counsel. Throughout Dwight’s second term, Milton was just a few miles away and frequently offered advice. In fact, Milton had direct access to the President like few others had. When he wished to communicate with his brother without going through White House channels, he addressed letters to a trusted individual, who was instructed to hand-deliver them directly to the President.

At Johns Hopkins, Milton continued his policy of openness with students, and became a beloved figure on campus. He had a light over his office door; when that light was on, it signaled that students were free to enter and discuss whatever was on their minds.

In 1964, Hopkins completed construction of a new (and long-needed) library building, which opened in November. The following year, after a secret vote by the trustees, the new library was formally named the Milton S. Eisenhower Library, perhaps because Milton had made the new library his top fundraising priority.

Milton retired from the Hopkins presidency in 1967 and was succeeded by Lincoln Gordon. In 1971, upon Gordon’s abrupt departure, Milton was asked to return as interim president. He was still living nearby, and, despite his desire to remain retired, he could not turn down such a request. So, for ten months in 1971 and 1972, Milton Eisenhower again served as President of Johns Hopkins University. With his encouragement, the Glass Pavilion was built during his interim presidency.

When Steven Muller was named president in 1972, Milton retired once more, this time permanently, although he remained deeply interested in university affairs until his death in 1985.

For a full-length biography of Milton S. Eisenhower, consult Stephen E. Ambrose and Richard H. Immerman, Milton S. Eisenhower: Educational Statesman (JHU Press, 1983). In what might be the most informative chapter title in any book, the chapter on Eisenhower’s return as Hopkins president is titled, “Goddammit, If I Had Moved to Palm Springs, This Wouldn’t Be Happening!” While the Ferdinand Hamburger Archives holds his records as Hopkins president, most of his personal papers are housed at his brother’s presidential library in Abilene, Kansas.