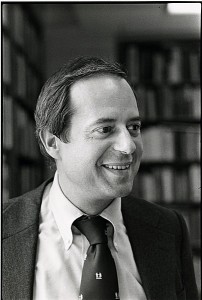 Steven Muller, who passed away on Saturday, January 19, was the tenth president of The Johns Hopkins University, serving from 1972 until his retirement in 1990. Prior to coming to Hopkins, Dr. Muller had a varied and interesting life, to say the least. Born in Hamburg, Germany, to a Jewish father and a Catholic mother, his father was arrested by the Nazis and sent to a concentration camp. Because his father was a decorated veteran of World War I, he was released from imprisonment, and the family emigrated to Britain in 1939, just weeks before Germany invaded Poland.

Muller’s family eventually settled in Los Angeles and Muller landed several small movie roles prior to graduating from UCLA in 1948. He studied in Oxford under a Rhodes Scholarship, and then earned his doctorate from Cornell in 1958. He returned to Cornell a few years later as a faculty member in political science then became vice president for public affairs.

In 1971, Muller was chosen Provost at Hopkins, to work under President Lincoln Gordon. While still dividing his time and traveling between Cornell and Hopkins, he heard on his car radio that President Gordon had resigned without prior notice. Reportedly, his first thought upon hearing that was, “OK, now what?” The trustees asked Milton Eisenhower, who had retired from the presidency in 1967, to return. Eisenhower agreed, but only until a successor could be found, and he expected the search to be expedited. Eisenhower must have liked his provost, because Muller’s “provostship” became an apprenticeship to the next level. After only ten months as Provost, the trustees named Dr. Muller to succeed Milton Eisenhower. 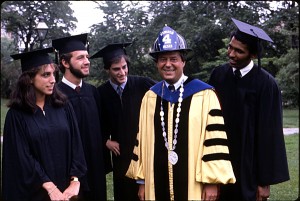 Dr. Muller presided over eighteen years of expansion, both of programs and of buildings. Nine major buildings were constructed at Homewood during his presidency. He was instrumental in founding the Nanjing Center, in partnership with Nanjing University, and he was the driving force behind NASA selecting Hopkins as the site for a new Space Telescope Science Institute, headquarters for the Hubble Space Telescope. Students nicknamed him, “The Man with the Tan,” due to his bronzed appearance.

He retired in 1990 after eighteen years as president, the second-longest tenure in University history, behind only Daniel Coit Gilman’s twenty-five years. He founded the American Institute for Contemporary German Studies in affiliation with Hopkins in 1983, and remained associated with AICGS in retirement. He was also the second University president to serve as President of The Johns Hopkins Hospital (the first since Gilman).

On a personal note, one of the first projects I worked on after joining the University Archives in 1983 was processing the archival records of the Office of the President, including the office records covering the first ten years of President Muller’s tenure. It was a great opportunity to see behind the scenes how the office worked and how decisions were made.